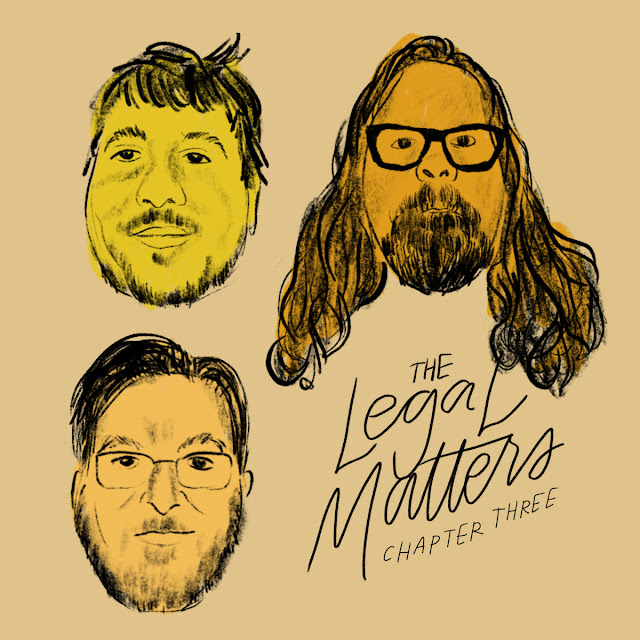 I avoid mentioning lockdown and Covid in reviews, not out of callousness, but in a belief that music should be a diversion from the strain. I will mention it here though, because as we see signs of coming out of the tunnel, I can think of no better album to accompany me than one by The Legal Matters.

The trio seem to be joined at the hip. I always assume that if I tell one something, he will tell the others, I don't need to contact all three. This expands into their music which always comes across as brotherly, tight and united. There is a real bond between the three and this album more than any confirms that.

I thought I'd look at a couple of other reviews of Chapter Three, not because I'm a magpie. but to see if those reviews concurred with my thoughts. Being honest, they don't really. I see comparisons to Big Star, Fountains Of Wayne, Weezer and The Beach Boys. There may the odd bit somewhere that does, but largely I don't hear any of that.

The Legal Matters have far more in common with a band like Crowded House and the harmonies are more Simon And Garfunkel or The Everly Brothers. The songs are divided equally between Chris Richards and Andy Reed, but this is no dictatorial song writing, the three work on all the songs together to expand what is initially brought to the table.

The fact that one member writes the odd numbered songs, the other the even, may concern some about track sequencing. It did me as I (wrongly) associated Reed with the slower numbers and Richards with any pace. Well that certainly isn't the case here.

I would never have associated Andy Reed with the wonderful The World Is Mine. It is all barrel piano, a little Toytown Psych and has far more in common with bands Like The Successful Failures. That's All is all Roy Orbison 60's twang and could almost appear on the American Graffiti soundtrack. You would think Reed wrote it, he didn't.

This also underlines how collaborative the album is. The Painter is spot on 70's Piano Pop yet Please Make A Sound has a cracking 80's synth sound running through it. Make Things Up is splendid twang. A Memory Of Sound is jaunty pop at its very best and the closer, Passing Chord is an absolute vocal masterpiece.

The Legal Matters usually do mellow best and there is plenty here to keep those fans happy. But there seems to be more chances taken on this third album and boy do they work. The harmonies are as tight as ever, but the songs seem to have even more oomph.

There are plenty of bands that harmonise well. Perhaps, a few too many that made that California scene a little done. They should have gone to Michigan, because The Legal Matters could come up with any of those albums easily, but no other band could have come up with something as varied and great as this. Highly Recommended!

You can listen the album here. It is available on CD, Vinyl or Download.