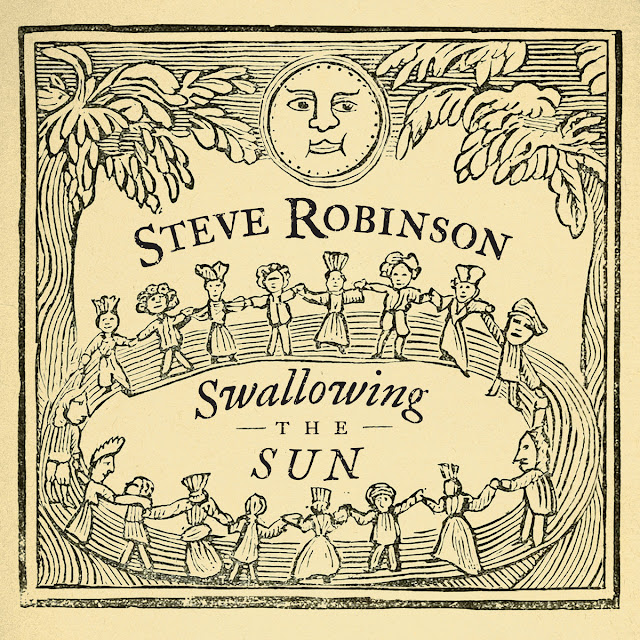 Steve Robinson is an Englishman who isn't in New York, but is in North Carolina after previously being in Florida. The Headlights were a band noted for Folk Rock and at times sounded more American. This solo album sounds far more English, far more in common with his Scunthorpe roots.

With The Headlights connection, it will probably be labelled Folk Pop, but Swallowing The Sun is more Pastoral Pop. It is a beautifully arranged album, gentle, magnificently moody, whilst still being melodic. Plenty of hooks, but far more it is about a vibe.

The only real Folk standout is probably Skinful which has a real Celtic tinge. Milk And A Dash edges that way, but there is a Toytown Psych Pop theme trying to break out. This is a Pop album with an Acoustic platform that is expanded splendidly in the instrument additions and arrangements.

Many of you know how tired I get of XTC comparisons, but the whole affair feels very Nonsuch, not in the songs, but certainly in the style. So it is no surprise that Dave Gregory guests on two songs. The two are Quiet One which is very George Harrison and Needle In The Red.

Needle In The Red is a fantastic song, the album stand out and Gregory's Guitar work throughout is jaw dropping from the Slide to the soloing. The song approaches 6 minutes and that seems too short. Make You Mine reminds me a lot of Dear Madam Barnum.

Dizzy Love Song is great McCartney Pop and Mr Empty Head is another gem of a song, very 70s Pop Rock. All 11 songs here, although very different, merge into a splendid soundtrack. It is is an uncomplicated album, yet you admire the thought that has gone into the writing and arrangements. Highly Recommended!