It's Karma, It's Cool - Homesick For Our Future Destinations 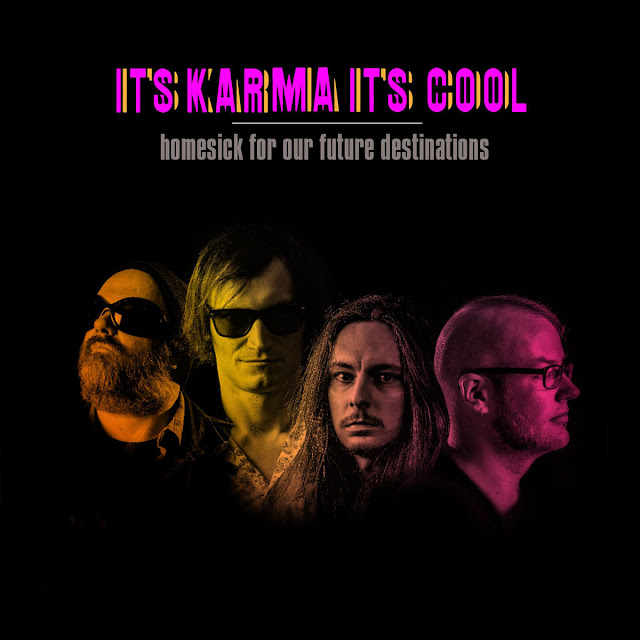 Witnessing his development from then, around 2015 I think, has been delightful. It's Karma, It's Cool is still Lincoln based, but the quartet are a very different affair. Their debut album promised much and showed a variety that would appeal to many more than the three chords brigade.

The follow up reveals even more layers. It is a slightly more restrained, even a little darker, album than Woke Up In Hollywood. Homesick For Our Future Directions is even more of a Pop Rock album and shows a great maturity that I never expected all those years ago.

The band are very much a sum of their parts, venturing into all areas, almost Modern Prog on Absent Transient, Universe Of Us edges towards AOR. Future Destinations is a fine and bombastic instrumental closer and Holy Toledo smooches and oozes West Coast Rock.

There's even a nod to the Power Pop Days with the rifftastic Coffee Cup Circles. Many will point out She Slept With The Radio On as the standout here, it is a beautifully arranged song, but I have to go with the splendid Wild Fire Flames. It has everything that you could wish for in a Modern Pop Rock song.

Styring's vocals have always reminded me of Mental As Anything. But he dispels a lot of that here. There's variance in tones and the expertly produced material allows him to demonstrate this. The album is less hectic and really works because of that. It is a corking affair. Highly Recommended!

You can listen to and buy the album here. You really should.