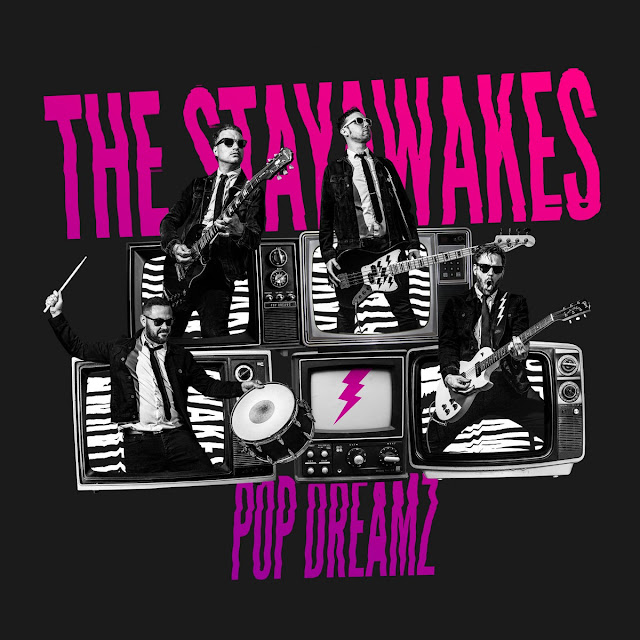 I'm not as involved in Power Pop as I used to be, but when you hear something as good as this album, you realise what it was that drove you to the heart of the genre. The Stayawakes are a quartet from Portsmouth, yes Kids they are British and this, their second album, pushes all the right buttons.

Pop Dreamz has all the Power Pop requisites, big Guitar riffs, great middle eights and enormous choruses. There's even a song called Power Pop Massacre to ram the genre message home. There's no ballads amongst these 11 songs, the Guitars are all aimed at maximum pace.

More recently Power Pop has become more and more American based barring the odd exception like The Speedways. It really is refreshing to listen to something home based. Another problem has been front loaded albums, well you could pick any of these songs as embeds.

The odd song will edge towards Pop Punk or AOR, but largely The Stayawakes know what they like and want to bring you along. The opener Wendi just crashes in, grips you and leaves you wanting more. Lovestruck reminds me of those Glam Rock days in its pure enjoyment.

The album may be heads down, but the band can play, there are so many hooks and great solos such as the closing solo on It's Cool, It's Rad. The riff on Every Word But Please, the Oh Telephone opening and the Pace of the Pop Punk-ish Down For Love are all highlights in stand out songs.

The sound has most in common with the 90s American Power Pop Wave and you can imagine how great this lot will be Live. Pop Dreamz may be the best Power Pop album that you'll hear this year, it has certainly livened me up. Highly Recommended!