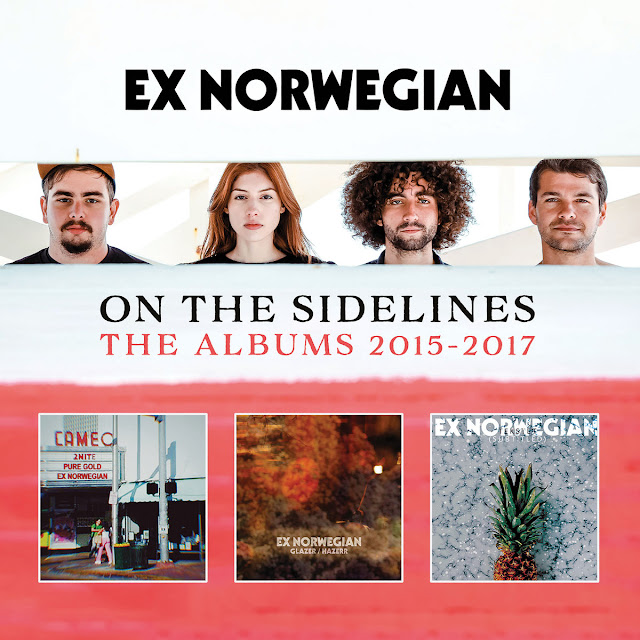 I hate the term "Best Kept Secret" just as much as "Criminally Underrated" Why would anyone want or aim to keep a fantastic band secret? Equally why use a term that suggests everyone is ignorant or hit out at a music fan's missing out. Ex Norwegian have been described as both, regularly. Without doubt, Roger Houdaille is one of the great Pop Rock songwriters.

People congratulate my taste at times which I baulk a little at. All I do is tell you about great artists, many ignored. I don't make the music, they do, all the praise should go to them. However, if you do rate my selections, I will tell you that Ex Norwegian are probably my favourite band of this century.

They don't make it easy for themselves though. The band name leads to wrong assumptions. Album to album, the direction changes between Psych Pop and Pop Rock, both being fantastic, but confusing the casual or potential listener and as these albums reveal, names like Glazer/Hazerr and Tekstet (Subtitled) conjure up thoughts of industrial electronica, Kraut Rock or some non English Language Indie Garage Rock.

Ex Norwegian though are fantastically inventive, have a pop sensibility that is hard to match and are a killer live act. Any band that counts both Chris Price and Fernando Perdomo as helpers underlines that pedigree. So on to these three albums which I look upon as The Road To No Sleep, a 2018 IDHAS Album Of The Year containing Making Deals which was probably the Single of that year.

Pure Gold has 7 Covers amongst its 11 songs, but this is no easy way out album. Rather like Caddy's last album, the choices are inspired and in many cases reworked dramatically. Tintern Abbey's Beeside and Jimmy Campbell's Close My Case And Move On are splendid choices. The standout is the cover of It's A Game, one of the great lost Power Pop singles and showing that 1977 wasn't the dying out of the Bay City Rollers.

Three Bonus Tracks accompany the album including an ace version of Todd Rundgren's International Feel. Glazer/Hazerr adds a Radio Session from 2016. The album is a wonderful example of lo-fi Psych Pop that would feel right at home with trends in 2022, yet it became more of an acquired taste then. It is really inventive in its retro aims, but seemed to confuse as many people as it delighted.

Tekstet was a return to Pop Rock and was largely a Houdaille solo album with Michelle Grand chipping in. I like it a lot, but it does seem a little haphazard without the usual attention to detail. The songs are fine, but it seems a bit lacking melodically. Any Old Time though is one of the best things ever committed to an album under the Ex Norwegian name. It could be suggested that if this album provided the direction to No Sleep with its big production and melody fest.

Three of the songs on Glazer/Hazerr were recorded by Houdaille's side project, Plastic Macca previously and those versions are included in the nine bonus tracks here. All three albums show the inventiveness and at times unique approach taken by Ex Norwegian. The band are taking on the world and the success of the Think Like A Key label as shown Roger's musical nous with a roster of classic and new artists.

I have a real affinity with the directions that Ex Norwegian take. IDHAS may seem to centre around inventive melodic Pop Rock, but my life away from it is spent listening to Psych Pop, Prog and Indie noise. The band have successfully created a back catalogue of quality and variety on their own terms and remain an inspiring presence in an X Factor world. They deserve your attention as much as any and more than many.

I have chosen one song from each album to give newcomers a small taste of what the band are about. You can buy and listen to the album here. The Think Like A Key label can be found here.