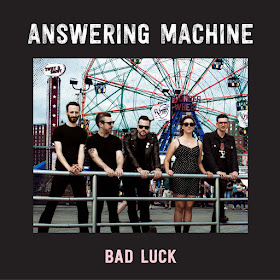 I'm back in more familiar territory with Brooklyn five piece Answering Machine and it reassuringly great. After a couple of EPs that signposted the way to this debut album, these 10 songs reveal everything that you hoped would materialise. Bad Luck is a great Pop Rock album.

The two vocal approach works beautifully, whether that be when either takes the lead and even more so when they combine. I'm reminded a lot of Ex Norwegian with the mix of male and female vocals and again that is no bad thing.

There's a folky sound to Samantha Campanile's voice at times, reminiscent of Kirsty MacColl and this only enhances the enjoyment. A song like Water Signs also shows that the band cross genres well, adopting an almost UK New Wave feel.

Wet Blanket has far more in common with the New York New Wave and Marie is built around a Clash like riff, almost Sandinista like. This Year has the pace of a Pogues songs and all these influences mix and work as well as on any debut album that you can name.

The album though is at its best when it relies on its best template which is pretty close to Power Pop. The big choruses and hooks on the likes of Cherry Coke, Riverdale and Bubblegum. Answering Machine master this so well that it is to their credit that they branch out.

The stand out song here is the title track. Bad Luck is a four minute song that feels two minutes long, it has everything that you need for a successful single. This whole album is a joy, wonderfully played, beautifully constructed and a real upbeat listen. This is also yet another triumph for Wiretap Records. Highly Recommended!