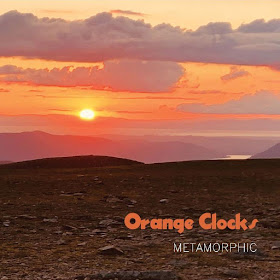 Orange Clocks offer up an excellent second album, very different to the strange debut album, Tobe's Sphere 2. The debut was incredibly interested, but not helped by the irritating narration and interludes. Metamorphic reveals what the UK band are more about, although that is hard to tag.

Although lobbed in with the Space Rock brigade, which means Hawkwind essentially, there is a lot going on. Let Me Breathe and the second half of Miles Away deserve that label, but Metamorphic has far more in common with a more Classic Rock.


There are hints of Gabriel Genesis on more than one occasion and Floating Temple is Psych Rock that is initially built on a riff that The Black Crowes wouldn't be unhappy with. Ammonite goes full on 70s Prog, wonderfully so. Noggy Pop is a wonderful explosion of Sci Fi Rock, completely spaced out and incredibly hypnotic.

Space Witch is a great opener building and building into a speed influenced wig out. The stand out though is Eye Of Psybin, a real Gilmour-esque Pink Floyd vibe leads into a splendid rock out close. I'm reminded of Big Big Train on this and overall a rockier version of that band. It will be no mean feat if Orange Clocks can grab similar success because this album is great.