Nick Piunti And The Complicated Men - Heart Inside Your Head 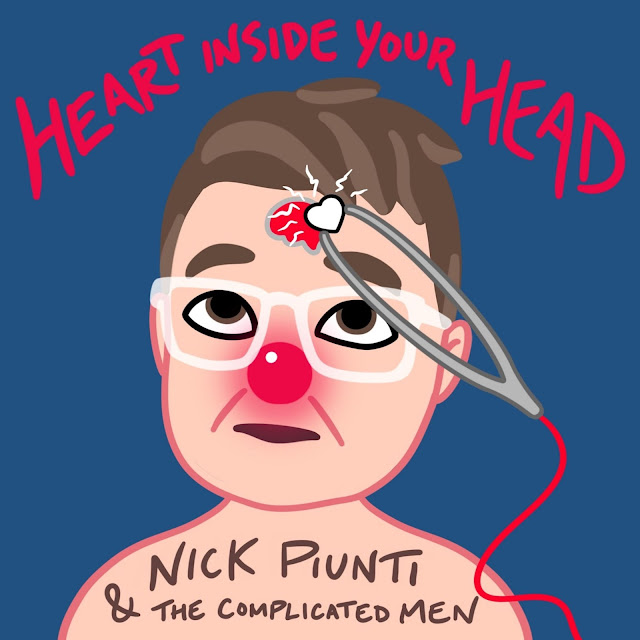 I don't usually go so early with reviews as Heart Inside Your Head is not released until 20 May, But the album is so good that I wanted to put this out there. Only two tracks are available to embed at present, so I will revisit the review nearer the release time.

Nick Piunti has a superb back catalogue that is anchored in ace Power Pop. The template has been so popular and beautifully done, but I've always wanted Piunti to branch out a little, rock it up further if you like. This is that album.

I'm not sure if it is due to being locked down for two years or The Complicated Men becoming more of a unit, but this is wonderful Pop Rock with the leaning more towards Rock and it really works. There is an obvious crunch that just grips you.

The Guitar is well up in the mix, the riffs are giant and the Guitar solos are rocktastic. There's also the addition of keyboards that don't lighten the sound, but expand it. Take for instance I Want Everything. Under normal circumstances this would be one of the Ballads that Piunti does so well, here it is a revelation.

A massive Rock riff opens the song and haunts the background throughout. The addition of piano and Female Backing Vocals expands the sound into something Stadium Rock. This is the Nick Piunti of 2022 and I love it.

Trying Too Hard continues that vibe with an enormous background Jangle and a rip roaring melodic solo. Keys To Your Heart endorses his reputation as a great chorus writer and the splendid closer Gloves Come off is a meandering melancholic joy.

Fans of the Power Pop need not worry, there are still more than hints of what Piunti is known for on My Mind (Plays Tricks On Me) and Slave To It. But the progression is more than apparent, One Of The Boyz reveals a bitter lyric matched to a wonderful Pilot like Riff.

Pre-order details will appear here and on the Jem Records site here. Worry ye not. I will remind you nearer the time when details are up. You can find out more about Nick Piunti here.