The Speedways - Talk Of The Town

There is a valid argument that The Speedways reignited Power Pop in the UK and progressed to hit the States to the point that any new band in the Genre are usually compared to them. It all seems like a masterplan, but it was nothing like that really. When I reviewed the 2018 debut album, Just Another Regular Summer, it was a complete surprise to my ears. I loved The Breakdowns, but I never expected to branch out into a solo career that stepped into my Pop Rock domain.

The debut was only ever supposed to be one off. Indeed in that first review, I implored Julian to not let it be so. The album featured in the IDHAS Best Of 2018 and lo and behold, the following year, Rum Bar Records got hold of it for a CD Release that added five Bonus Tracks. The American doors were now opened. The follow up, Radio Sounds expanded the remit as an album that seemed more focussed, a little more relaxed and an upgrade of the sound. Just as good as the debut, if not better, there was one more important note. The Speedways were now a quartet. The album hit the IDHAS Best Of 2020.

In the meantime, the band were gaining quite a reputation as a live act. The quartet gelled into one of the best live bands that you will see and hear. It was as though lock down had never happened. So we reach the third album and wow! The first thing that you notice is the Production, it is big, I mean really big. Gigantic even. Dead From The Heart Down is a splendid opener, but you don't realise what you are in for as the album progresses. That opener is Power Pop and why not, the band made their name with their mastery of the genre.

But the more you listen to, the more you note that this isn't necessarily a Power Pop album. Radio Sounds hinted that there was more to the band, but the honing of the foursome has resulted in an absolute Guitar led masterpiece. Power Pop hasn't been left behind, but it is everything else that is most interesting. Julian hasn't lost his chorus strength, but at times Talk Of The Town sounds a little more American. There's also a Classic Rock adventure that continually breaks out.

Wrong Time Wrong Place has a twin Guitar blast that Thin Lizzy would be proud of. Strange Love is built around a strutting riff and A Drop In The Ocean has a real West Coast Jangle about it. A Song Called Jane And A Lie Called Love is angular yet a little The Knack and has a real plank spanking solo. Summer's Over has a real Blue Oyster Cult feel instrumentally and Secret Secrets edges towards Glam Rock. Kiss Me Goodbye is great UK Indie 80s Guitar Pop and Weekend 155 sounds so Dark 80s, turns into an urgent dramatic verse and then a trademark Speedways chorus. 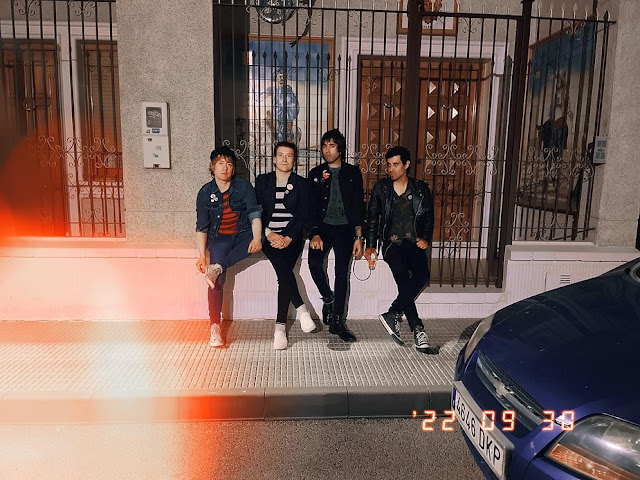 Talk Of The Town is all Funk but still has time for another wonderful Guitar wig out. Monday Was The Start Of The Stars is even more of a Thin Lizzy Guitar assault and even has a Kevin Rowland like chatty intro. This is a band album. Guitarist, Mauro Venegas is heavily involved in the song writing on what was previously Matt Julian dominated. Bassist, Adrian Alfonso also writes a song, the excellent Taken (with an incredible Guitar solo) and forms a superb rhythm section with drummer, Kris Hood.

This is the sound of a band at the top of their game. The Guitar sound is a major surprise and what a set of choruses. If The Speedways started out as a bedroom lo fi affair, they are at the other end of the scale now. This should be the album that breaks them. Talk Of The Town is released on 21 November. Currently only the two tracks that have been previously released are available to stream. Both are embedded here, but don't really do justice to the full scope of the album, so I will add further tracks to the review when the album is released.

The album will be available here. You can listen to and buy the two tracks there and investigate the band's previous output. Matt Julian's various Demos can be listened to and bought here,

Posted by Anything Should Happen at 21:59