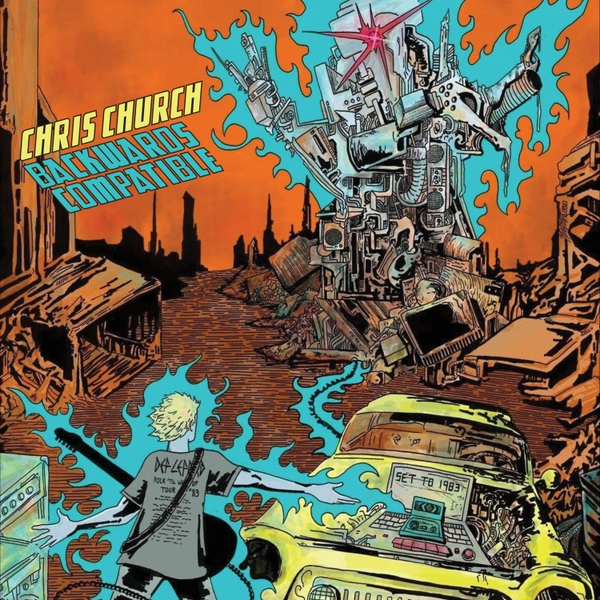 Distribution has been difficult during this worldwide lockdown, so I'm delighted to report that Spyderpop has joined the world of Bandcamp, making purchases from their splendid roster much easier. So it makes sense to revisit my review of the new Chris Church album from a couple of months ago, now that it is so much simpler to buy.  For first timers, welcome to one of the best albums of 2020.


We love Chris Church at I Don't Hear A Single, I mean really love him. He loves music and it shows. His career has veered from Prog to Pop, settling largely on Rock, but whichever direction he takes, the quality is constantly high. You can read Mick's Career defining IDHAS interview from 2018 here to underline this.

Spyderpop has a fine label roster that concentrates somewhere between Power Pop and Pop Rock. Church's last album, Limitations Of Source Tape, fell neatly into that category, although it felt more Rock than Pop. The Matthew Sweet comparisons were a bit overdone and distracted people a little from the sheer joy of the album. You can read the IDHAS review here.


The Sweet comparisons were meant as a compliment and you can hear the likeness in the Vocal, but there is a major difference in that Chris Church doesn't need a Richard Lloyd, because this feller can play and Backwards Compatible is the album where he demonstrates this.

This is a Rock album, at times a very 80's Rock album, the Guitar is up front, in fact it is everywhere. It as though the leash has been removed and Chris has been let loose. It is much harder sounding than what has gone before, wonderfully so.

There are no Ballads here. From the storming album opener, Someday's Coming Fast through to the closing breakneck pace of Pop Dreams, this is an album to shake your fist to. No sitting down is allowed. As previously mentioned there is that mid 80's feel at times, particularly on the likes of What R U. This seems intended Production wise and Lori Chanklin has done a fantastic job on the album.

Don't be fooled by thinking this album is heads down and solo, the choruses are big, particularly on Begin Again and Kiss It Goodnight, but the album is at best when it just goes for it. The best examples of this being You Are The Thunder and Coulda Fooled Me.

Limitations Of Source Tape is such a fine album, that Church could have been forgiven for recording Source Tape 2. The fact that he hasn't deserves great credit. No one is making an album like this these days. The Guitar is back. Thank Goodness!


You can listen to and buy the album as a CD or download here.