The Posies Are Coming To Town 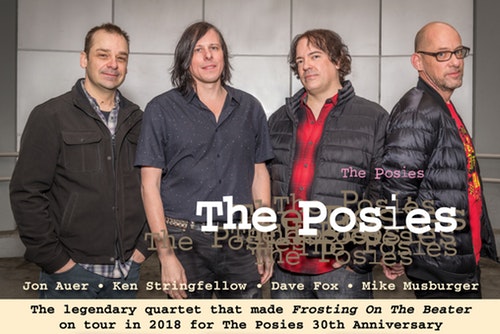 Here in the UK, we look at the live Power Pop and Pop Rock happenings in the States with a mixture of longing and an opportunity to moan. Most of all of it is financial of course, more would come across of course, if people bought more albums or supported tours by attending.

So when a band do make the effort, it is essential that they are supported and The Posies do support the UK Scene. They are becoming Elder Statesmen of Power Pop and remain one of the finest live acts that you could witness.


2018 has been a really exciting time in Posies land culminating in this 30th Anniversary World Tour with the original Frosting On The Beater Line Up. It's a wet dream for fans and builds on the 2 Disc Deluxe Edition Release of the album.

Some of us will be attending as fans at different tour dates. I'm at Manchester, so there's also a chance to catch up on what is going on in the IDHAS world. Keep up on Facebook and Twitter to find out who and where.

The Four UK Dates are as follows :

The band then head off to Germany and Scandinavia to complete the Tour. You can find tour dates and buy tickets here. The splendid Omnivore label has reissued the three Geffen albums as double disc editions. Two have been released, Amazing Disgrace is coming up very shortly.

You can find details and tracklisting in the following links :


Frosting On The Beater


The albums are also available at all the usual retail emporiums.
Posted by Anything Should Happen at 22:11

Email ThisBlogThis!Share to TwitterShare to FacebookShare to Pinterest
Labels: The Posies