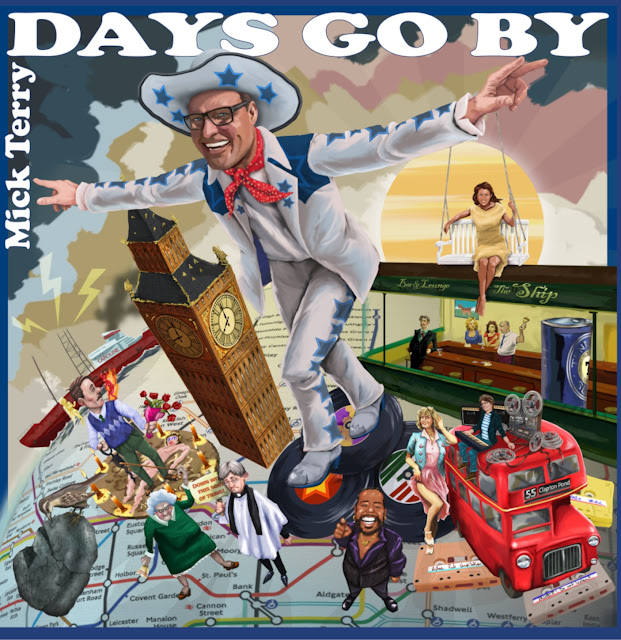 It's been a long wait since Mick Terry's excellent debut album, The Grown Ups and although I knew this was coming, it's been a real impatient wait. I'm also a big Jim Boggia fan, so their collaboration seemed like a match made in heaven.

What has transpired is an incredibly mature album, very different to that poptastic debut. Yes those Pop Sensibilities are still present, particularly on the magnificent show stopper, Emily Come Back, but Days Go By goes much further.


This is a real Singer Songwriter album with nods to Motown and Philly, particularly on Arthur's Tale with it's Temptations like feel and Everybody's Talking. Riverbend is like Jackson Browne with a crack Country Rock band.

Pop's A Dirty Word is great 70's Pop Rock, there's a fair few name checks to remind you of this, it's very Elton John, in fact and Elton and Billy Joel spring to mind on a fair bit across the album. Rocking In The Photograph is Terry at his pop best with it's Madness like piano, a sort of take on Ben Folds.The Glitter Guitar makes you think of Pilot on Magic and January.


Stars is in Easy Listening territory and features some great Slide playing, Friends Like That has a Toto like intro accompanied by a splendid Brass Chorus accompaniment. Ignorance Is Bliss has a melancholic beauty in it's stripped down way, with a wonderful Pedal Steel solo.

The album was recorded in London, Philadelphia and New York and that shines through with the influences on display. Boggia's presence glows too. But for all this variance, it's Terry's trademark pop that shines through on the magnificent, Emily Come Back, one of the best songs that you'll hear this or any year.


Posted by Anything Should Happen at 17:04