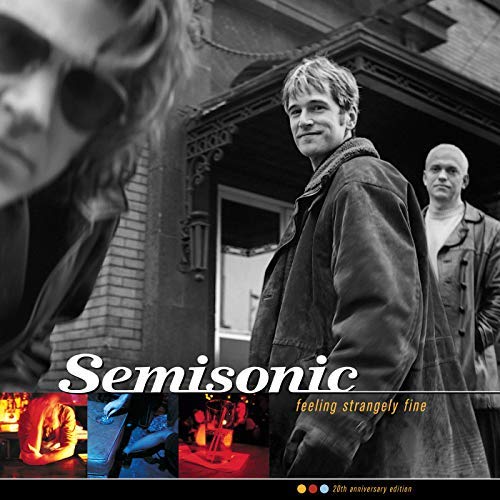 20 years since Feeling Strangely Fine! Wow!  Released here in the UK at the back end of Brit Pop, Dan Wilson finally got the success that he deserved. He was no newcomer, almost 37 on release on this, the band's second album.

I'd got in to Trip Shakespeare in late 1986. I'd got really fed up of the UK scene, New Romantics was not for me and after brief respite courtesy of Glasgow, it became all dance nonsense. Through the 80's I'd concentrated more on the States and Canada and a few fellow music fans exchanged tapes via Pigeon Post.

One such tape had Applehead Man on it and I was hooked all the way through to the end. I still consider Lulu to be one of the great lost Masterpieces. After being dropped by A and M, Trip Shakespeare called it a day and via Pleasure, Dan Wilson and John Munson formed Semisonic with Drummer, Jacob Slichter.

Pleasure had released an EP, which was followed by the Semisonic debut album, Great Divide. The debut is a fine album, although it felt very different to the Psych of Trip Shakespeare. It was this follow up that hit the bucks.

It was aided by two big singles, Closing Time in the US and Karaoke favourite, Secret Smile in the UK. The album is a fine thing indeed, obviously the two great singles are present, but the rest is pretty dandy. The hypnotic keyboard riff of Singing In My Sleep, probably my favourite song on the album.

Never You Mind is Billy Swan Piano Rock, great Pop. This Will Be My Year, a Slichter Song, is all Jangle and Riffs at pace, it's an absolute corker. California simply weeps. All 12 songs stand next to each other wonderfully. Of The Four Bonus Tracks, Beautiful Regret has long been a favourite of mine, certainly hints of Trip Shakespeare here.

The band recorded one more album, 2001's All About Chemistry, a much lighter softer affair, that to be honest was sadly a tad dull. From there on, Dan Wilson went on to an excellent, if infrequent, solo career. However is work as a Writer and Producer for the likes of Dixie Chicks, Pink and Taylor Swift. He also wrote three songs on Adele's 21, most notably Someone Like You.


Fans will be disappointed to only have 4 Bonus Tracks added, all of them B Sides. It's known that there were around 60 demos for Feeling Strangely Fine, but only 20 were Studio Recorded and apparently, only these 16 mixed originally. But maybe the other four would have been welcome.

However, it is worth noting that the original album sound was really iffy, unfeasibly loud which distorted a couple of songs. I don't know if that was because of the mastering or the way it was recorded with the band. All that is solved here.

I know most of the cool people will already have the album, but the master is great and it's also available for the first time on vinyl. This is also a great time for a generation on to catch up on one of the great 90's albums.


You can buy the album on CD Download or Vinyl everywhere. The likes of Amazon offer a free download with a physical purchase. There are also still some Special related items available on the Pledge Music Site here.


Posted by Anything Should Happen at 21:52