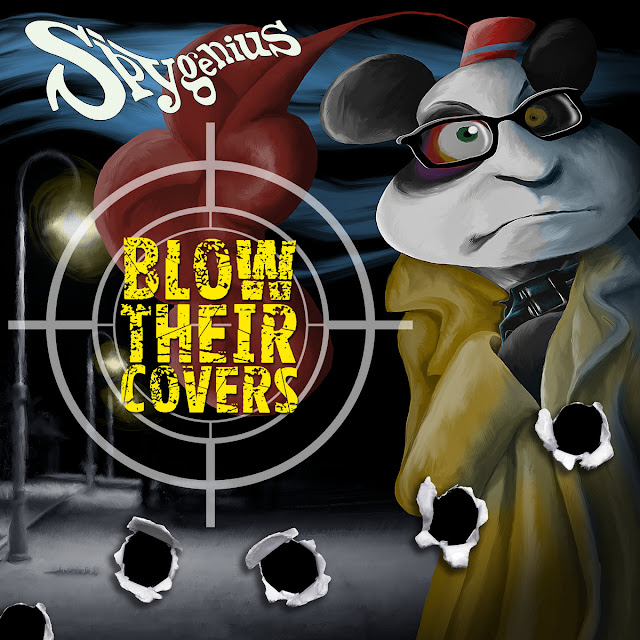 Normally, I make a quick exit when I hear the words cover album, but remember this is Spygenius and nothing is ever "the normal" with the Canterbury gang. So you are not gonna get a cliched selection of songs. When I first heard of the plan to release this, I thought wow that is gonna be one hell of a Psych Pop treat.

Then when I thought about it, I thought no, the band's influences are much wider than that and if anything they are a band much closer to Robyn Hitchcock and even more so, The Soft Boys. So yes, there is a Soft Boys cover. It is Queen Of The Eyes and it is so fab that it is the lead single.

However, this is no Indie Psych Pop joyride, the song selection and the variety in Spygenius don't allow it to be. Squeeze's Is That Love, one of my own favourite songs, gets a fairly faithful rendition, although with a slight Toybox twinge. Top Marks too for an inspired cover of Big Stir label mates, Plasticsoul's Therapy, Pop Rocking up a complete mood change to the song.

They also make Rock n Roll Women their own and yes there is a (Lennon And) McCartney song, but it was written for Cilla and is an unexpected inspired choice. Add in covers of The Monkees, Gene Clark and Traffic and you'll note the variation.

But this isn't where it ends. You would always expect Spygenius to throw in something out of kilter and they do it thrice here. Murrumbridge Whalers is a sea shanty, recorded before it became hip, Griselda is wonderfully wacky and weird.

But the top award goes to a barmy version of Madness's Michael Caine, it is awesome. Having said that, it is wonderful to hear Kelly's Heels' Please Stop Talking. It is absolutely mastered here and a song I haven't played for so long. The harmonies of all four band members make these songs even more terrific too. You can call this a cover album, but I think it stands up on its own two feet.

Posted by Anything Should Happen at 21:39

Email ThisBlogThis!Share to TwitterShare to FacebookShare to Pinterest
Labels: Spygenius