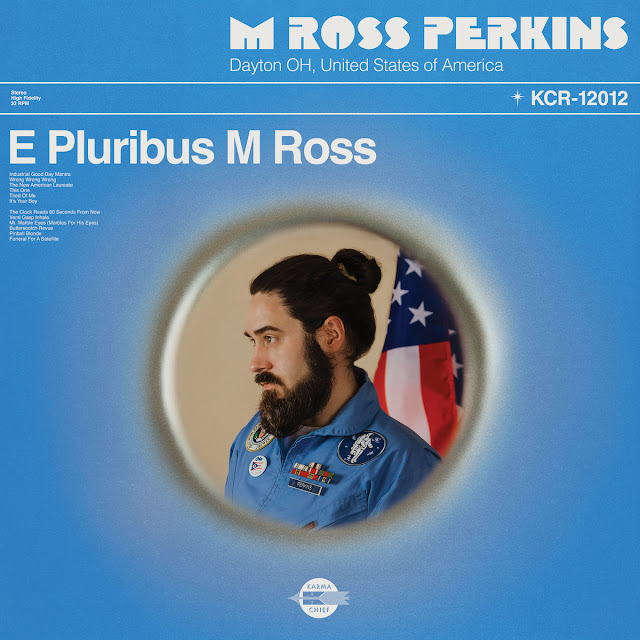 The second (no "sophomore" allowed) album from Dayton Ohio's M Ross Perkins is a hark back to the classic Pop of the late 60s and early 70s. Perkins has an ability to make verses as catchy as the choruses, a real rarity as few do both.

Before we get to the music, the album is a testament to how good Home Recording can be. I hear a lot of home recorded stuff and it really is the good, the bad and the ugly. This isn't a criticism of some as you can be limited to the equipment and software you are using. The usual problem is the mastering which means the volume is way too low. Here is an example that could easily have been recorded in a professional recording studio.

E Pluribus M Ross is a little GospelbeacH in places, but where it excels is in the quality of the song writing and in particular lyrically. A song like This One is a great west coast laidback pop rock affair, but the catchiness and unusual lyrics raise it far above the ordinary.

Tired Of Me has a wonderful jangle and is again as catchy as catchy can be. Mr Marble Eyes (Marbles For His Eyes) is exceptional 60's, almost Toytown, Psych Pop. It's Your Boy something that could be a little twee becomes a superb cross somewhere between Nilsson and Gilbert O'Sullivan.

Butterscotch Revue is as great an example of what makes 70s Pop Rock so adorable and then there's Pinball Blonde which is a splendid venture into 60's Beat Psych Pop, another superb listen. Venti Gasp Inhale gets even more trippy, jangly Byrds like Psych, whilst underling the strength of Perkins's vocal.

The New American Laureate is another example of the song writing strength, a great Pop song with an ace country twang. Even the one minute long instrumental, The Clock Reads 60 Seconds From is inventive, a sort of cinematic intermission.

The closer, Funeral Of A Satellite is a brooding masterpiece. Again there are reminders of Nilsson whilst instrumentally it is very White Album. The song builds and builds, containing so much into just two minutes. Simply magnificent.

There isn't one mediocre moment amongst these 12 Tracks. I could embed any of the 12 songs, but as usual I stick to three that may vary from your own favourites. I urge you to listen to the whole album. Perkins is a lyrical genius and although it is only April, this is Album Of The Year material.

You can listen to and buy the album here. You can find out more about M Ross Perkins here.

Posted by Anything Should Happen at 16:53