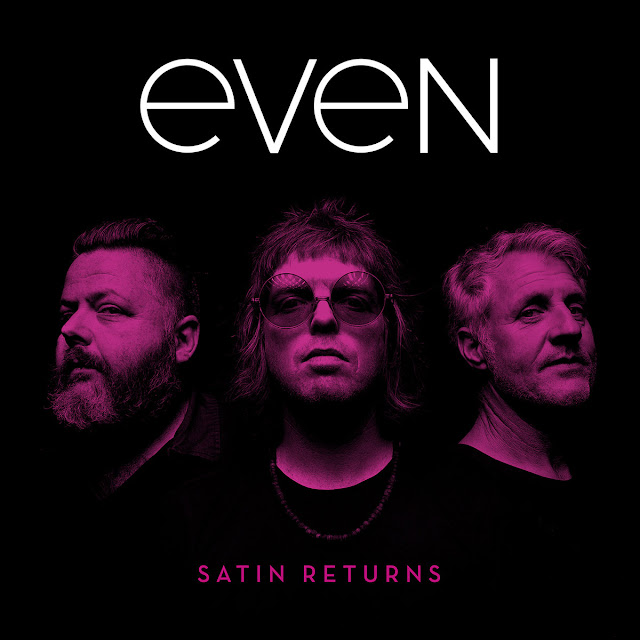 They say that seven is most people's lucky number. If that's true then there can be no coincidence that this is Even's 7th album and that it's almost 7 years since 2012's excellent, In Another Time. Satin Returns just continues the consistent quality of the band's work.

The Melbourne Trio know what they are good at and the resultant albums never disappoint. This album is every bit as good as their outstanding 1996 debut, Less Is More and that's how you expect it to be. The Riff and Chorus count is high.


I'm admirer of Brit Pop in what it achieved at the edges. I do get frustrated at the generation after me's belief that Music began in 1994. Although, Even are very much from those Brit Pop Years, but there is a difference. The excellence and consistency of their output is beyond compare, certainly far more impressive than either Gallagher.

On Album Number Seven, there are plenty of nods to Brit Pop, you'd expect that, but there are even more comparisons to 60's and 70's Classic Rock. Out Of The Woods is all jangly Psych Pop, not much unlike The Church. Falling Down is all 60's UK Beat and this just goes to emphasise why Even excel at what they do. There is no hint of staidness.


Jet Black is like a popped up Rolling Stones, yet Indian Ocean is an aching Power Pop ballad. The opening track, suitably called The Opener, is a song that defines Even most, it could appear on any of their albums. The real gem though is Return To Stardust. I've been trying to get it on the Radio Show for the past couple of weeks, but 9 minutes plus is a big chunk out of an hour.

The closing track will close this week's show though. It's too good not too, a wonderful sprawling venture into Pink Floyd territory, it's mesmerising. An Even album is one to be listened to throughout, there's so much variation. If you don't you'll miss a gem.

Posted by Anything Should Happen at 13:13

Email ThisBlogThis!Share to TwitterShare to FacebookShare to Pinterest
Labels: Even