Kidd - Where Are The Strange People? 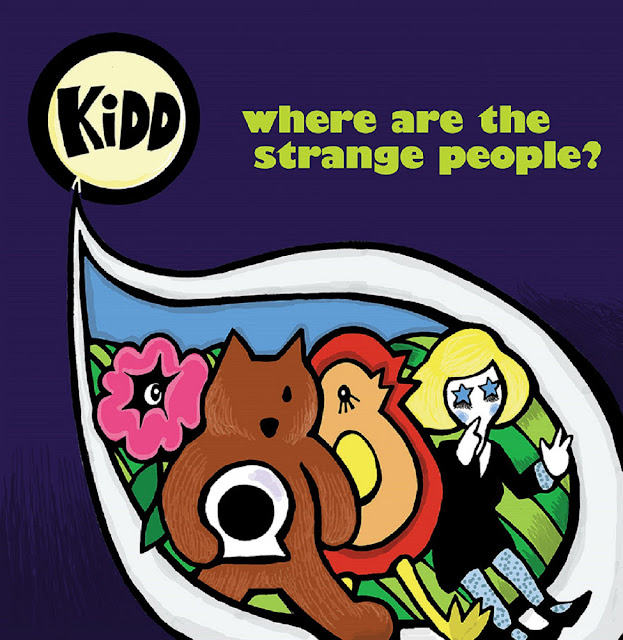 Stuart Kidd's time in the likes of BMX Bandits and The Wellgreen confirm his credentials as part of the Glasgow Music Mafia. There can be a tendency for Scottish bands to want to be Big Star or perhaps a cross between Teenage Fanclub and Nada Surf. There is none of that here.

Where Are The Strange People? is more in Wellgreen territory, but a much in a much more poppier space. Kidd puts the Pop into Psych Pop and these 11 songs form an enchanting laid back joy. I'm a little late to the review party, I've been meaning to review this for a while. This tardiness shouldn't fool people into thinking that the album isn't a priority, because it's a cracking piece of work.

I've seen the album described as lo-fi, I don't hear any of that, it sounds great blasting out here. It's a pastoral trippy affair that never loses sight of wanted to be melodic. There's a real charm here. It does hint heavily at Psych, but not in a far out man kinda way. The instrumental, Calisto, is a bit getting it together in the country with added tape hiss, but the rest of the album is a real sit back and enjoy affair.

Baby Bird could be a 1970's low calorie Bread TV Advert, Misty's Golden Years has a real wit and is almost Blue Mink. Mr Bumble Bee is mentioned in the opener, Little Flower and you can readily imagine those Bees. There's an almost Motown Back Beat to the Summer driven lyrics.

An Afternoon Is April is a great slab of Folk Pop, Independence Day reminds me of John Howard until the beat driven drum close, but it's Looking For The Way Out that I identify most with. That is a perfect example of how to write a Psych Pop song, it doesn't have to all be about backward guitars.

Where Are The Strange People? is beautifully put together, perfect for Summer Days. It's a splendid collection of songs. Turn On, Tune In, but don't Drop Out.


Posted by Anything Should Happen at 13:58

Email ThisBlogThis!Share to TwitterShare to FacebookShare to Pinterest
Labels: Kidd