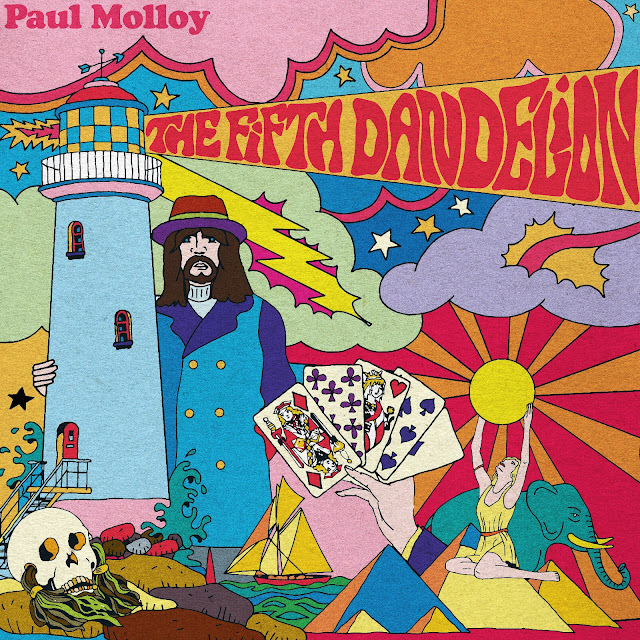 The Coral, as well as cementing their own reputation, has become a sort of Wirral Motown. As tentacles spread far and wide, the band are fast drawing up a Family Tree. Bill Ryder-Jones, Ian Skelly and now Paul Molloy have all taken slightly linked but very different solo directions.

Guitarist, Molloy may have provided the best album of the all. No stranger to the scene after spells in The Stands, The Zutons and his current venture with Skelly in The Serpent Power, the album was recorded in a two year period, during which both of his parents died.

With this in mind, you might expect a reflective, maybe morose, affair. There is none of that. This is a joyous album of glorious Psych Pop. It is very 60's in feel, but that Psych whimsy rings out in what has been a fantastic revival of the genre over the past couple of years.


The Fifth Dandelion has much in comparison with the current Medway led sound, but there is also great Pop bursting to get out and at other times, the album borders on Toytown. The only time that the album gets anywhere near The Coral is the Lounge Folk of Bring In The Night and that has a real Psych close.

Salad Days is great Glam Rock, almost Gilbert O'Sullivan, it is outstanding. Dungaree Day is Small Faces meeting The Beach Boys. The Return Of Cherry Pie could be Prime Time Pugwash and contrast all this Pop to the early Pink Floyd vibe of From Venus To Pale Blue.

The Swamp is in Bossa Nova Sci Fi Movie territory, Andromeda is almost Orgone Box and My Madonna is splendid Baroque Pop. The closer, Talacre Lighthouse, a place that I know only too well, is perfect Medway Folk.


Paul Molloy has served up one of the surprises of the year. An outstanding album that offers up a wide range of variety. It will be high up in the End Of Year List, if not the toppermost. You can listen to and buy the album everywhere.