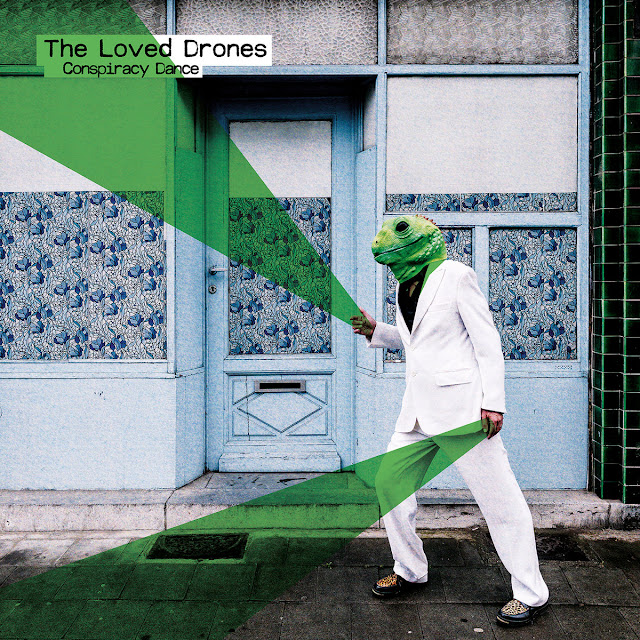 It isn't often that I get to write about a great Psych influenced album by a Belgian based band that has a member noted as the keyboard player from a hometown band. When I tell you that that keyboard player went under the name of Professor Bubblekeys in a band called Poisoned Electrick Head, it may all seem a bit surreal.

It might also hint at days when me and a few others wound up potential hipsters by making up the names of bands to see who would say they'd seen them live. I talk about Brian Carney and The Loved Drones and this is the fourth album.

The previous three albums were largely instrumental. Conspiracy Dance marks Brian Carney adding vocals and lyrics. The result is a real change in direction. The Psych is still present, but the sound is far more Indie and this is matched by a sound that is very 80's in feel, if not in content.

Carney's lyrics are a mix of stream of consciousness and rhyming couplets. Sometimes, they are completely off the wall, yet at other times they are insightful and witty. This results in a strange but wonderful journey, that is never dull and revives memories of the likes of The Bevis Frond.

The Day That Bryan Gregory Died is an inspired storytelling affair that has a Baggy chorus, yet Headhand is a spoken word head fuck. The Last Night is a late night psych schmooze built on a killer riff, yet Empty could be an Indie Anthem.

Compare the aforementioned with Conspiracy Dance and My Name Is Sky, both of which could be Men Without Hats and are great 80's synth pop. Quarantine could be Primal Scream. The masterpiece though is the seven and a half minute pop explosion, A Firework Exploding, which reminds me of Pete Wylie, yet I couldn't tell you why.

Conspiracy Dance is an amazingly good crossover album. If there isn't a genre called Indie Psych, we should start one. Inventive, gripping and very different to what's around, this is a top notch album. You can listen to and buy it here.

Posted by Anything Should Happen at 23:07

Email ThisBlogThis!Share to TwitterShare to FacebookShare to Pinterest
Labels: The Loved Drones