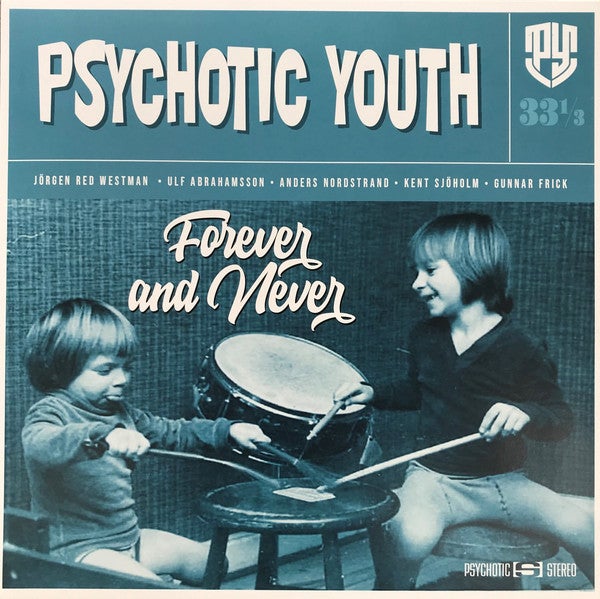 In 1985, amidst the legwarmers and short sleeve jackets, you could need to sell a million singles to get to Number 1. Much has changed since then, but thankfully Psychotic Youth haven't. Forever And Never is the band's 14th album and their Garage Power Pop still sounds as great as ever.

The IDHAS Review of 2017's The Voice Of Summer could easily be written for Forever And Never and that is what is so refreshing. Through all the 2020 nonsense, it is wonderful to listen to something that reminds you of how it should be. You can read The Voice Of Summer Review here.

I've seen many comparisons to The Ramones during the band's lifetime and although there is a little of that, most of these descriptions are lazy because Psychotic Youth are far more melodic and have more in common with Glam Rock and New Wave if anything.

Indeed, if there is a difference here to the previous two albums, it is that there is less Dr Feelgood and more Chinn and Chapman. Ten O'Clock Postman is the killer song here, an absolute Power Pop classic, but there is much to be admired elsewhere.

Goodbye Summer is Late 50's Rock and Roll, Come On (And Give Me Something Good) is pure Undertones and Before You is another Power Pop gem. Can't Call On Me is more down and dirty and That's The Way A Woman Is could be The Cars.

The only real heads down affair is Detention and the closer, Picture Of You is a New Wave Joy.  17 songs in 43 minutes with hooks aplenty, big choruses and sprinklings of delightful Farfisa, what more could you want? There are many great things to have come out of Sweden, Psychotic Youth should  definitely be included amongst them.

Posted by Anything Should Happen at 14:07