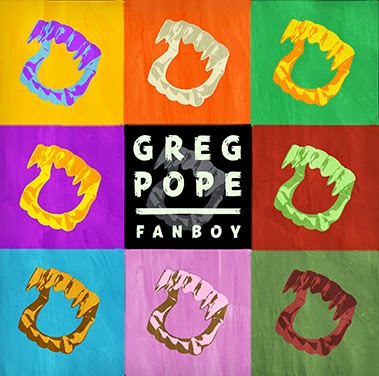 My two favourite labels at the moment are Sugarbush Records and Megadodo.

In the unorganised mess of music I have here, I have a "current favourites" shelf and Markus seems to have the knack of releasing limited vinyl releases of it's contents. The latest being Nick Piunti and Pugwash.

John at Mega Dodo also hits the spot. I may seem to be regularly stood on the Power Pop step, but my tastes are all over the place including a love of Prog. John's releases seem to mirror the randomness of my collection, Viv Stanshall next to The Luck Of Eden Hall.

I mention Markus in particular, because I'd love to have something on vinyl from Greg Pope and he seems the man to do it.

The Noughties were a bit mediocre for Power Pop, fortunately, we've been spoilt recently. The quality of Greg Pope's albums can be included in the exceptions.

Greg offers up grown up Power Pop and did throughout those lean Noughties years, lyrics that aren't I love you, yes I do, my girl's left me and I'm sad. He builds melodic lyrics around killer hooks and he can play a mean guitar, not an obvious requisite for the genre.

It really is Pop for adults and his last album, Fanboy just doesn't let up. This isn't an album that's front ended it's a joy all the way through, a proper album. I don't need to mention individual songs because you'll want to listen to it all the way through.

To these ears, it's better than the previous Pop Monster and that's some compliment. I'd put him in the same camp as the likes of Nick Piunti. I have no idea why Power Pop doesn't sell millions of albums or why Greg Pope isn't much bigger.

I should start a campaign to change that.

You can listen to the album here. You can also find out more about Greg, keep up with the latest news and find direct links to buy the album here

At the very least give the album's opener New Beginning a spin.

Posted by Anything Should Happen at 10:05