The Explorers Club - Together 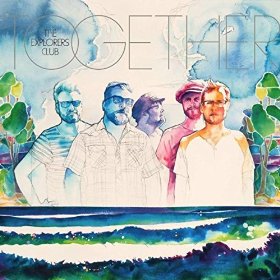 We've loved The Explorers Club since 2008's Freedom Wind. Jason Brewer has the harmonic hooks nailed and this continued on to 2012's Grand Hotel. The new album is the best yet.

There's always been Beach Boys comparisons and rightly so, probably more so here. The harmonies are from a by gone era, but one that should be revived. We listen to so much clever clever music, particularly Psych Pop wise and Power Pop bands with hooks and songs about a girl who has left them, it's refreshing to hear such well made pop.

The band has developed from Surf Pop into more complex harmony arrangements. We are always looking out for that great summer album, something that catches the optimism and hope, this is this years.

But don't think it's all Beach Boys, this will appeal to West Coast devotees and those who thought The Feeling only had one album in them.

The opener, Together is really soulful, followed by the lead single, California's Calling Ya, which is more of what they are about. Once In A While is the stand out, great pop and there's also contemplative moments on Quietly and the closer, Before I'm Gone.

It's a short album, but we like that. We've long been advocates of say what you've got to say and no more. CD's demise is regrettable but it has cut down on the all filler no killer format of albums.

You should march down to your record shop, sorry get your mouse fingers clicking and buy this now. The world will look and sound a better place.

It's also great that Wyatt Funderburk is now on board. We've been long term admirers since Pendletones' Forty-Nine Per Cent, an amazing album for a then 17 year old. His Second Saturday stuff is amazing, Here's The Deal being one of our favourite albums from 2011 and his 2013 solo album, Novel And Profane is ace.

He's also a noted producer of the likes of Linus Of Hollywood, Bowling For Soup and Silver Sun.

You can pick up Together at the usual online places, but please support your local record shop / independent mail order guy if you can.

The Explorers Club are on Facebook and Twitter.    They are also on Bandcamp where you can pick up the excellent Freedom Wind album.

You can also visit Wyatt Funderburk's Bandcamp site where he is offering extended versions of both Second Saturday albums at Name Your Price. You can also buy his 8 releases in high quality digital formats for the bargain price of $21.60.

Posted by Anything Should Happen at 09:39