Morgan - The Sleeper Wakes (Brown Out) 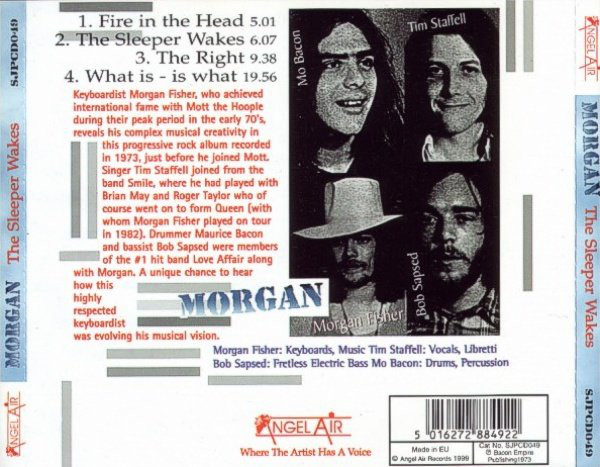 Just to prove that it's not all about pop here and that I am a big Prog fan, today it's all about Morgan.

The excellent Morgan Fisher, travelled, via Love Affair, to the last line up of Mott The Hoople and was superb during their Broadway Residence etc. He had been on a year out of Love Affair when Everlasting Love hit the heights,

Tim Staffell had been the vocalist and Bass Player in Smile, he co-wrote Doin' Alright with Brian May. Tim left Smile in 1970. May and Roger Taylor added Freddie Mercury and ultimately John Deacon and became Queen.

Everlasting Love was not just what Love Affair were about. A great little Pop outfit with overtones of Soul and Rock and a great vocalist in Steve Ellis.

When Love Affair split up in 1971, soon to follow was Morgan. A band that would ditch all that pop nonsense in favour of Keyboard driven Prog.

Maurice Bacon joined Morgan Fisher from Love Affair and Bob Sapsed and Tim Staffell completed the quartet. Staffell would write the lyrics, Fisher, the music. Signed on a two album deal with RCA, off they went to RCA Studios in Rome to record their first album.

RCA Studios was a 16 Track Studio, a chance to experiment. The studios also had a multitude of instruments to incorporate, most importantly the VCS3, a first generation British Synthesizer.

The result was Nova Solis, released in 1972, a Prog Rock epic. Three tracks on Side 1, one 9 part, side length, title track on Side 2. The concept was a Science Fiction one. Incidentally, as well as writing the words and music for Alone on Side 1, he wrote two of the 9 parts of Nova Solis alone, one was Earth, a Smile song.

The album sold little and the band proceeded to record their second album, which was offered up for a 1973 release. RCA Italy were not impressed with the inner artwork offered up, a rude pun on the title of the album, Brown Out and not at all happy with the complex arrangements and the album was shelved. The beauty of a four track album is that you can feature all four in a post the size of this.

It's a crying shame that it wasn't released. It's a massive step forward on the great debut album, some outstanding guitar on the side long, What Is - Is What and a band knowing exactly what they wanted to do.

It's even more strange, because it was the time of Topographic Oceans and it's ilk and with some decent promotion and perhaps a good support act tour, you felt Morgan could have blitzed it.

It had a low key release, as Brown Out, in the States in late 1976, but caught my ears as the first ever release on Cherry Red, as The Sleeper Wakes, in 1978.

I'd largely been moving away from Prog then via the back end of Punk and the start of New Wave. It was a strange time to be releasing something that wasn't full of 3 minute chorus led songs. However, my heroes were Mott The Hoople and I knew of Morgan through them and Tim Staffell's pre Queen history made me buy it on it's first week out. It was largely due to a suggestion from the superbly knowledgeable Rumbelows manager, Derek Wadeson.

I was entranced, you just lost yourself in the album. Life was not just about I Love You, Yes I Do.

The release led to a fruitful relationship between Morgan Fisher and Cherry Red, most notably, the splendid Miniatures album, featuring the likes of Neil Innes, Robert Wyatt and Andy Partridge.

As for the The Sleeper Wakes, it sold little, but influenced me enormously, making me look back as well as forwards, no mean thing for a 15 year old.

If you are a Prog fan and don't have this, you should without any hesitation. If you aren't, you'd be surprised at how an album like this can grip you.

If you shop around, you should be able to pick it up for under a tenner on CD or as a download for about £8.

After Morgan's demise, Morgan Fisher answered an ad to join Mott The Hoople, being present on The Broadway Tour amongst others and the band's finale, The Hoople, a glam masterpiece.

As well as his solo work, he played keyboards on Queen's 1982 European Tour, before eventually moving to Tokyo in 1985. He became an arranger for other bands and soundtrack writer for TV and Film. He's also a noted photographer.

Tim Staffell became a designer and animator of note. He was involved in the likes of The Hitch Hiker's Guide To The Galaxy and as chief model maker for the first series of Thomas The Tank. He returned to music in 2001 with aMIGO and has released two albums, aMIGO and 2Late.

Tim also has a connection with the excellent Jonathan Kelly, via Humpy Bong and Outside. There'll be a feature on Jonathan Kelly, his Folk Rock greatness and his connections to Tim, Snowy White, Chas Jankel and Terry Williams.

Maurice moved into artist management and Bob, sadly died in a motorbike accident.

Morgan has an excellent Web Site here and his sleeve notes on this album and the songs within can be found here.

Further details on Tim's superb animation and model making career can be found here. It's only up to about 2009, but Tim is active on Facebook and I'm sure will add his thoughts there or here.

Posted by Anything Should Happen at 14:56