Propeller - Fall Off The World 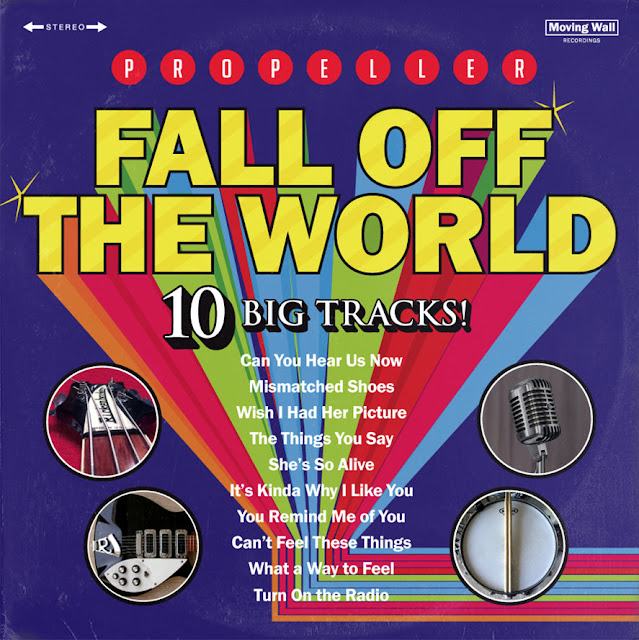 As you can see, this place is a work in progress, it was rushed out due to demand. The plan was to make it a far more multimedia led place and in the background we were planning a monthly radio show and alternating fortnightly, a chatty podcast with interviews etc.

This remains the idea, but time constraints with other ASH Stuff and work slow this down.

I mention this, because whilst I search for the first playlist for the radio thing, I wanted it to be about stuff available now, so that people could pop off to buy it. That isn't as easy as it seems, I only play and post about stuff I like. It's not a pay per play thing, it's a fan's place.

Over the eight years of ASH, we get directed to a lot of Power Pop and Pop Rock. It's certainly not all that we are about, but the the group has got a certain notoriety for that. We get sent a lot of Mod Pop, Merseybeat, Garage etc and without being critical, because people do like that, it's not what we are about. We are secret Prog Rockers really, who like nothing more than to have Jason Falkner's Hectified on repeat.

We like a hook, a chorus, a song you can sing along too with a great solo. Call it Power Pop, Psych Pop, Pop Rock, New Wave, whatever you want, it's not about labels or the dreaded genre allocation. So why am I blabbing on about me, when the post is about Propeller.

Well, the first song I've chosen for the broadcast, leaving only another 57 minutes to source, is by Propeller.

What a great band they are. They aren't new and are in fact a duo, but their third album, released a few months ago is superb and after the excellence of the first two, this is a step up further.

For a pitch at what to expect, I'd say it's like Vocalist, Greg Randall is backed by Teenage Fanclub. The riffs are in that direction, there's a lot of jingle jangle, perfect for these summer months. But just as we like it, some great solos towards the end, round off the delight. Believe you me, the solos are ace.

I'm also getting used to shorter albums these days. 30 - 40 minutes is just about right, a bit like the old Side 1 and Side 2's of olden days. Say what you've got to say and get off and that suits what Propeller do just fine.

The opener, Fall Of The World, above, kicks the album off with a errrr kick and the hooks don't let up. The production reminds me a lot of Greg Pope albums, which is a compliment.


The album is track after track excellent, proper feel good songs and the best may very well be saved until the end. Turn On The Radio is a real Ramones tribute down to the 1 2 3 4 intro. Great Stuff!

Everyone is raving about the new Monkees album and rightly so, but how about ten songs written by the band and giving you that same windows open feeling? Well here you have it.

I rave about the likes Greg Pope, Nick Piunti and Michael Carpenter, well Propeller are up there with them.

You can buy the album from the Bandcamp's site for the ridiculous price of 5 dollars, the price of a pint of beer. So you will want to want to make your way there now. Just point the compass to here.

You can buy the CD at Ray's excellent Kool Kat Music or CD Baby.

Propeller are currently recording album number four for release next year, which promises to be a treat.

In the meantime, when you visit the Bandcamp Site. You can buy the two earlier albums, The Fear Of Rock And Roll and Don't Be Sorry Again, for five dollars a piece. So three albums for 15 dollars, wall to wall Power Pop, time to click that mouse.

Here's an example of what you are missing not grabbing them all.


Posted by Anything Should Happen at 17:20

Email ThisBlogThis!Share to TwitterShare to FacebookShare to Pinterest
Labels: Propeller