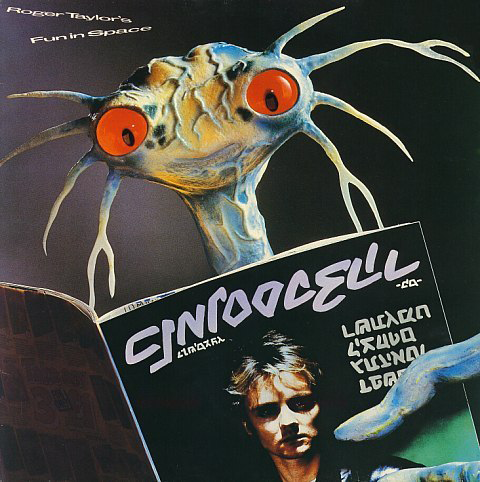 Queen had released their album, The Game in 1980. It was a pleasant enough pop album, particularly after the mish mash of the previous album Jazz, but there weren't too many surprises as four of the ten songs had been released as singles ahead of the release.

In the downtime from touring that album, Roger Taylor recorded his first solo album in Montreux. In the late 70's I had put together a cassette mix of Taylor's one song per Queen album, adding the I Wanna Testify 7 Inch Single. It was a great listen, his stuff was very different to the rest of Queen's output.

There was a simplistic beauty to his songs. The likes of Tenement Funster, Drowse and the B Side, A Human Body provided a really enjoyable listen, no bombast at all. Fun In Space continued that trend, the most notable difference to his Queen output was that there was a lot of synths present.

The album had a Sci Fi comic theme and feel to it. It was largely what he had done previously, but fleshed out and with more attention paid. Future Management, No Violins and Good Times Are Now fitted in with what had gone before.


The other songs showcased different ideas and that's when the album got interesting. The 50's Rock and Roll of Let's Get Crazy, Airheads which sounds so City Boy and the two longer pieces. My Country (Parts I and II) is a sort of more modern Dance With The Devil and then there's the title track.

Fun In Space is a brooding moody keyboard led joy, remote from Taylor's usually upbeat offerings. The album did ok in the UK and sold little in the States despite Queen's ascendancy there at the time. Now might be the time for you to Yanks to hear the album's many merits.


Omnivore have made a really wise choice releasing this and it's not quite as good follow up, Strange Frontiers. Three Bonus Tracks are added including the A and B of I Wanna Testify which was a real rarity for a long time.


You can buy the album here there and everywhere.


Posted by Anything Should Happen at 15:32