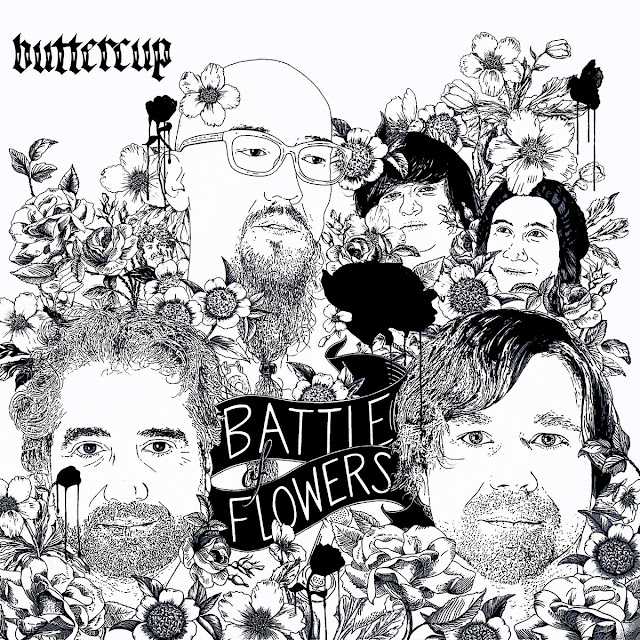 Buttercup are back with their first album for seven years and they've been much missed. The trio of Erik Senden, Odie and Joe Reyes are joined by the Navaira brothers of Los Bandeleros fame. Album number seven is everything that the band always promised to be.

For something that was recorded from live studio takes, Battle Of Flowers is surprisingly cohesive, all 12 songs intertwine beautifully and most importantly it rocks, letting up infrequently when the band need to come up for air.


It's not all noise though, there is some great Pop present here on the likes of Vicious Rewind and the wonderful, Don't Go It Alone. These are interludes though, great intervals until the band break out again.

68 Playmate is like Lou Reed fronting a great Psych Band, Let It Drop opens the album in rocktastic form, like a Mitch Easter soundscape, it's great. Gud Girls is even better, the gem on the album. Open On / Shut Off is more of a nod to the Art Rock that they've been noted for in the past.


The problem maybe for Buttercup in the past is that maybe they've been caught between two stools. Are they Jangly, are they art rock? It's also fair to say that San Antonio Texas hasn't been the centre of the musical world, perhaps it should be.

On Battle Of Flowers, Buttercup have not only offered up their best album, but it has purpose. This is a proper album, an album you listen to from start to finish. There will be tracks that stand out, but each listen offers up something different. It may be their best ever, but it is certainly better than most around.


Posted by Anything Should Happen at 14:03

Email ThisBlogThis!Share to TwitterShare to FacebookShare to Pinterest
Labels: Buttercup