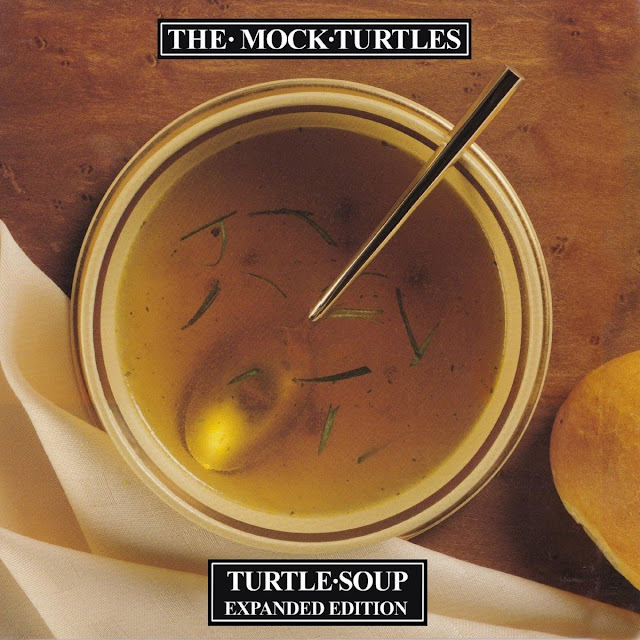 The Manchester scene from 1988, coined Madchester a year later, has names that roll off the tongue. Amongst James, Stone Roses, Happy Mondays and Inspiral Carpets, were The Mock Turtles. That scene, not unlike Brit Pop, had some real gems away from the obvious.

The Mock Turtles' 1990 album, Turtle Soup, was one such stand out. I'm really surprised that it's taken until now to reissue. The difference with this band was that although they had the Madchester template, trippy guitars, vocals a tad like Morrissey at times, there was far more depth.

Turtle Soup nods to a much wider area, there's late Sixties Beat, Psych and even mid 80's Goth Riffs. There is essentially a real pop heart to the album and riffs and jangles to hold on to. There are also early nods to Shoegazing. The sad thing is that most people will remember them for one song and those with a deeper knowledge for two of the band members.

Martin Coogan is the band leader and the older brother of Steve and actor, Martyn Glyn Murray was the guitarist. Also thanks to Vodafone and Sky Premier Football coverage, Can You Dig It has become anthemic and a reminder of those early 90's days. More recently, And Then She Smiles was the theme tune to the Sky TC Series Stella, again alerting the masses to what a great little band these were.

It's enough that Cherry Red have reissued the album itself, it deserves that, but unlike a lot of reissues, there are tons of extra stuff and it's not throwaway. Turtle Soup's 11 original songs have been expanded to a massive double disc affair of 41 tracks.

Amongst these extras are the early EP's, singles and b sides and seven demos. Those early EPs are again essential listening. The whole package is a credit to the label. Turtle Soup has been out of print for so long, that just throwing it out would have garnered much interest. The fact that this has been so properly curated makes it well worth your pocket money.


Posted by Anything Should Happen at 16:16

Email ThisBlogThis!Share to TwitterShare to FacebookShare to Pinterest
Labels: The Mock Turtles