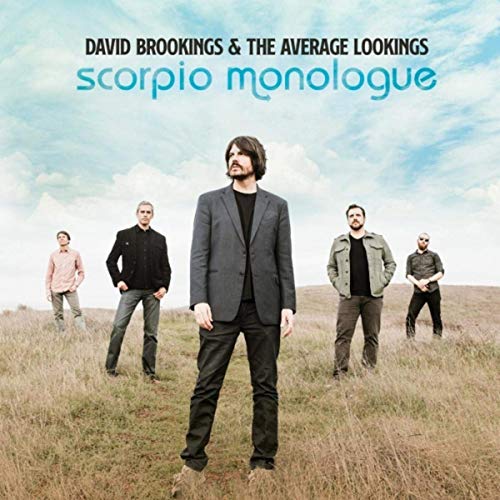 David Brookings offers up his second album with The Average Lookings after nigh on a two decade, largely solo, career. The self titled debut album is reviewed here and the great news is that Scorpio Monologue takes the band a massive step on.

Brookings voice has always been ideally suited to Power Pop, but simply calling this that would be a huge disservice. The arrangements are bigger, the Guitar solos hook you completely, put simply this album is far more than songs about lost love and bop she wop choruses.

Indeed, Time Takes You Baby sounds so Nick Piunti and I can pay the song no greater compliment than that. Silicon Valley is wonderfully country and is a real tongue in cheek tribute to an area that the artist knows well.

She's Mad At Me Again is pure 50's Rock And Roll, The Girl's Not Right is Jangly Joy with a Gunfighter Riff twist. Be Gone (Whoever You Are) is all Lounge Lizard and the epic 6 minute closer is a potential West Coast anthem. Lighters Out everyone! What a Guitar solo!

There's also a couple of covers amongst the 13 songs. Both are not essential although the take on Girl From The North Country is interesting and Without You reminds me of the Badfinger comparisons of the debut album.

You can buy the album everywhere and you should open your wallet. It's incredibly good at what it does and I've not heard as good a Pop Rock record in a long time. The album is released tomorrow and the Launch show in San Jose is well worth attending. The Bobbleheads are part of the support, providing even more reason to attend.

Email ThisBlogThis!Share to TwitterShare to FacebookShare to Pinterest
Labels: David Brookings And The Average Lookings