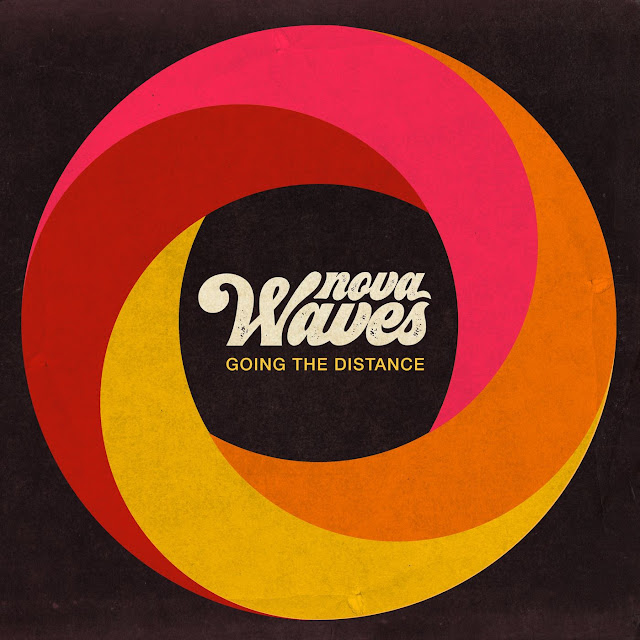 Hold the Front Page, a Pop Rock band have a licensing deal with a major label. Nova Waves have a deal with BMG for this, their second album. So there may be hope for others too, particularly considering that although Going The Distance is a splendid album, it is a bit schizophrenic. Another tick then. with a major signing something that isn't lowest common denominator.

These 11 songs fall three main ways, this may have something to do with the cosmopolitan constituents of the quartet. One member from Australia, two from Spain and one from France. The band alternate between Straight Ahead Pop Rock, Indie Fuzz Guitar and 60's Psych Pop.

All genres are handled adeptly. The Indie gets very late 80's / early 90's Glasgow and throughout there is more than a hint of Pavement. The Shining is very late 70's New Wave Power Pop whilst Night Ride is all moody Noo Yawk Drawl.

Just A Man is all Garage Noise, whilst Monkeys could be straight out of College Rock. Lady Musgrave is all get it together in the country strumming psych pop, more in common with Cambridge or Canterbury than the poptastic stuff elsewhere.

Hey Little Bird is another example of stoned campfire pop and Soulseeker is wonderful 60's West Coast, think Gospelbeach. It is the more straight ahead Pop that hits home most, even if is not the main intention of the material.

Radio Sound is latter day Beatle Pop, Something's Missing is as catchy as hell before it launches into a cracking Fuzz interruption. The stand out song though is the magnificent, Sugar In The Clouds which is 70's Pop Rock of the highest order.

Posted by Anything Should Happen at 21:24