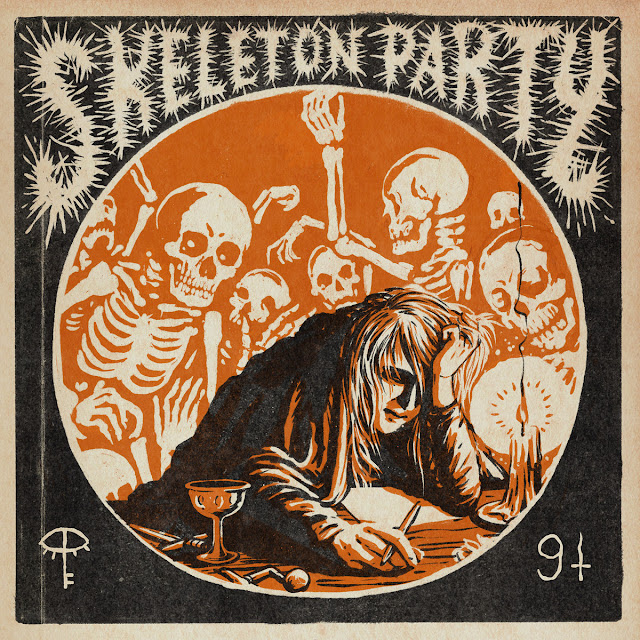 I am largely saving reviews for October's one a day, but there are a few that I want to tell you about before September closes. Joshua Powell's new offering is certainly one. It dropped my jaw to the point that I am already at the fourth listen.

Essentially a Rock album, but that doesn't tell half the story. You here Psych, Prog, Pop and even Jazz at times. The vocal reminds me a bit of Mew, but this is far heavier than them. When it shreds, it really shreds, but never loses the plot,

The departures are what makes Skeleton Party though. For instance Rainbow Trout is all slow and smoochy. it even closes with a sort of autotuned modern pop, almost hip hop vocal. Hole Mesa Fangs is great Modern Prog, imagine a chilled out Big Big Big Train.

Coral Castle ventures into Pop Rock wonderfully, but the album is at its best when it lets loose on say the last couple of minutes of Cannabis Rex and most of Nine Of Swords. The best may also be left to last as White Lodge (Fire) featuring the best closing of a song that I've heard all year.

The album features something for everyone, but it is genre defying. Psych and in particular, Prog fans will love it, but essentially Skeleton Party is the sum of its parts. People tell me that there is no invention in Rock Music any more, well there is here.

Others say that the guitar is dead, well it seems pretty alive here. This is an absolute crackerjack of a Rock album. If the IDHAS followers give it time, it will prove to be a long time favourite. Highly Recommended!

You can listen to and buy the album here. You can find out more about Joshua Powell here.

Posted by Anything Should Happen at 16:15