The Boxcar Suite - Every Side Of The Abyss 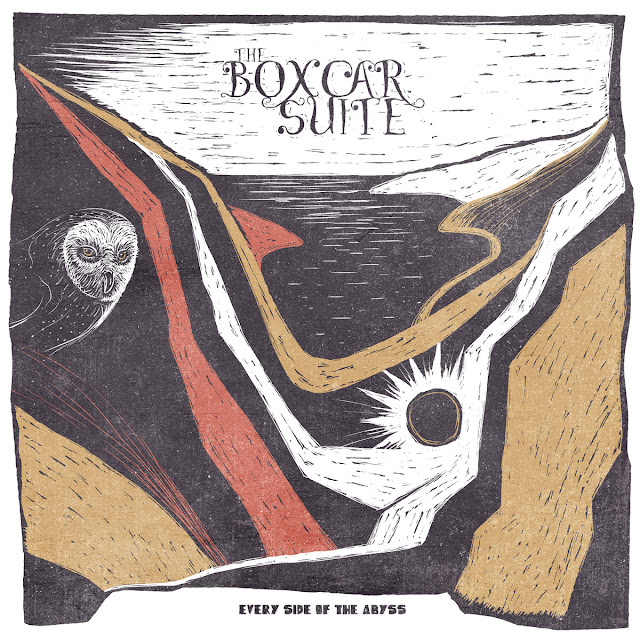 Dayton Ohio (Power) Trio just get better and better and their third album is a further example of what a great band they are. Inhabiting a world somewhere between Power Pop and Rock, there are many strands in between both.

This is a Guitar album and although all the prerequisites are there, riffs, choruses, storming rhythm section. it is the solos that take them into another direction. Even when the song veers into other genres, you know that the solo is gonna come, you eagerly anticipate it.

Take for instance, the Jangle Psych of Rakes Of Yore which contains not one but two solos, the first all psych, the second far more rocky. All of the solos on the album never ever detract from the song or take it over, they just enhance wonderfully.

Kings Ex is out and out West Coast Byrds jangle. It reminds me of peak period Diesel Park West. Yet Turndt Town is pure UK New Wave. Jim Mouse is right in the territory of The Church, yet Lit Hunk is out and out Classic Rock, a tad Blue Oyster Cult.

It is the variety that really impresses you. There are two fine examples of 70s Pop Rock, both different. The Flight has a funky tint that makes you think of someone like John Miles, but Wild Life Coach is more like those great UK second half of the 70s album that sold buckets despite Punk.

Post Up could be the album's high point, it is so damn melodic, however also present is the masterpiece that is Vincent Price. A splendid affair that starts with a killer riff, then has verses that just about get all the words in, the song just grips you. Every Side Of The Abyss is an outstanding offering. It will be high up in the IDHAS End Of Year List.

Posted by Anything Should Happen at 12:44

Email ThisBlogThis!Share to TwitterShare to FacebookShare to Pinterest
Labels: The Boxcar Suite