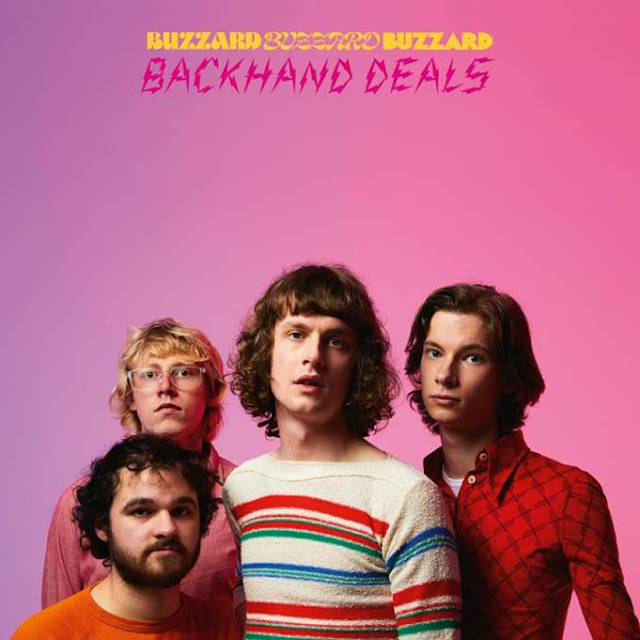 There was a time, not that many years ago, that every band with an ounce of melodic guitar pop would be compared to Jellyfish. Most weren't and I'd even risk upsetting my Power Pop / Pop Rock peers by saying that both Jellyfish albums haven't travelled as well as people believe/d.

There as been a revival of 70s Pop Rock recently, but most has been either Glam Rock or Easy Listening. Cardiff quartet Buzzard, Buzzard, Buzzard inhabit that land of Pop Rock, but few equal what they do. Backhand Deals is a beautifully arranged and produced 11 song joy.

Although the flares and butterfly collar are very much in sight, the band add an individual modern take on the genre without ever losing sight of the Retro. I defy anyone to be able to resist these choruses. The following is growing and growing and this may very well open the door for similar bands. Here's hoping as this genre has been unfairly unfashionable for way too long.

Our generation will of course be able to spot so many references, but that's because of our age. To the younger following, this will be a new scene and that's fantastic. 10CC will spring to mind most to oldies, particularly on Break Right In.

You can just imagine the band appearing on Granada TV at 5.15 in the afternoon, but the variety here is laudable. Feel The Chain is wonderful Piano Pop with a classic John Miles like solo. Demolition Song is great Funk Pop. I defy anyone to write as good a Pop song as New Age Millennial now or then.

It really is hard to pick out any song as better than another, but Faking A Living with its lyrical gems are hidden in the big chorus is a top notch song. Indeed, the whole album is one hell of a ride. Melodic and well built songs that never lose the plot. Absolutely Highly Recommended!

Posted by Anything Should Happen at 18:53