Lannie Flowers - Flavor Of The Month 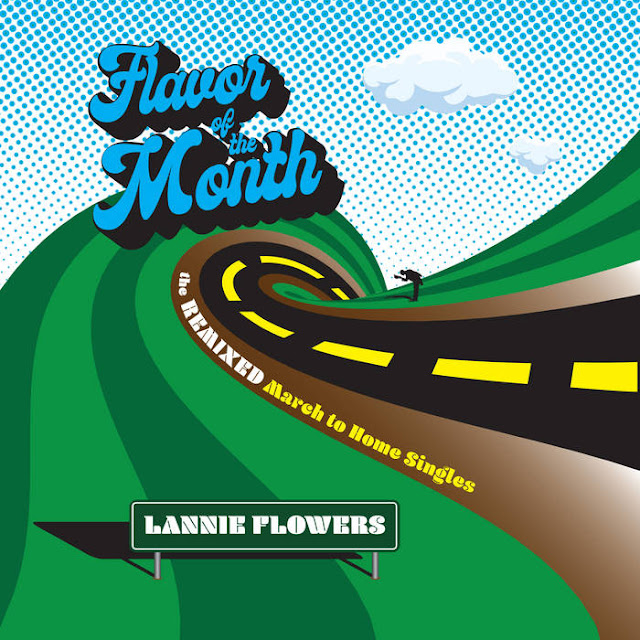 As a long term fan of Lannie Flowers, I marvelled at the trilogy of albums culminating in 2019's Home. I did wonder what the next direction would be and at the time, a monthly series of free downloads seemed to be a stopgap.

What those singles did allow was an opportunity to experiment and provide a chance to show that there was far more to Flowers than his Power Pop label. His fearsome live prowess and excellence with a chorus deserved far more than easy labelling. Releasing the singles as a collection was always a great idea. The difference and variety in each song would open up a whole new audience.

Then something even more inspired occurred. With the delays experienced due to Covid, Flowers had time to revisit the songs for the planned album. On remixing Let It Go, the song sounded so different, more modern if anything and the result was so good that it was decided to remix all 14 songs from the March To Home download series.

So what had started as a series to release songs that didn't fit on Home has come full circle. The songs were different in many cases, but remixing them has put an even bigger slant on them. Flavor Of The Month as a soundscape, has more in common with Modern Commercial Pop Rock. The best example is the excellent opener, Don't Make Me Wait.

This doesn't mean that the old Lannie has faded into the background. Songs like the title track and Summer Blue still nod to what has gone before. But elsewhere, it is as though a new whole world has opened up.

Lost In A Daydream is a magnificent slab of Toytown Psych Pop whilst Good is all Jangle. Day Glow All Night is 80s AOR and About You is in 70s territory with a wonderful George Harrison like Guitar break. What Did I Know has a chorus steps back further to the previous decade.

Where Did All The Fun Go is top notch UK New Wave with a Guitar Riff that is very Another Girl Another Planet. The closer, My Street is all Camp Fire Country, yet Doin' Fine is all Miami Vice synth in feel. There really is so much here to like.

There is enough here to please long time Lannie Flowers fans, but even more to welcome the new. Big Hooks, bigger choruses and melody at its core, Flavor Of The Month works as a stand alone album. Pop Rock / Guitar Pop at its very best.

Posted by Anything Should Happen at 18:00