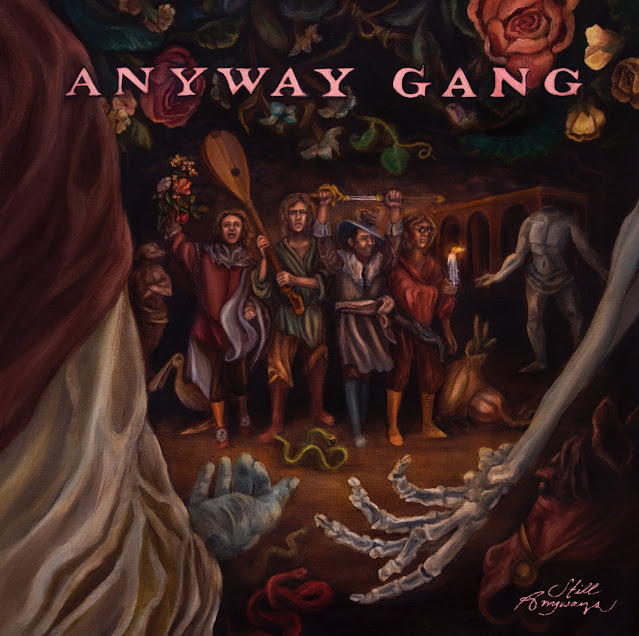 I'm really surprised that Still Anyways hasn't had far more attention in the three months since the second album's release, so maybe now is the time. The Canadian Supergroup have released their second album and it is really good, fun being the operative word.

Having four front men collaborating can be riddled with problems and the history of Supergroup albums is littered with dross. You can either get everyone trying to show how different and left field they can be or a backslapping mediocrity fest. Fortunately, there is none of that here, indeed the album is really cohesive as though this is a proper group, not a headline grabbing attempt.

It is helped by the quartet, all always coming across as regular guys in their day jobs. Sam Roberts, Chris Murphy (Sloan), Menno Versteeg (Hollerado) and Dave Monks (Tokyo Police Club) seem to have worked in a studio environment free of nonsense and pressure.

This is a great Pop Rock album that often veers towards Power Pop. There are a few surprises, particularly the opener, Alternate View, but the template is great melodic catchy Chorus led Pop and it is joyous. In these bad news days, it is just what the doctor ordered.

Out Of Nowhere starts a bit Don Henley but the chorus verges on Pop Punk. It is incredibly catchy as indeed virtually all of the album is. Real Thing is great Power Pop, handclaps and all. Remember To Forget is a wonderful example of mid 80s UK Pop.

Don't Give Up On Your Dreams is incredibly chirpy aided by its keyboard run and a fine jangle twang. What's Left Of My Love is late 70s New Wave and you will have heard Reckless Reckless on an IDHAS 10 Song Mix with its Busted vibe.

Call On Me is a campfire or front porch, happy clappy in a let's do the show right here way. It is Petty-esque at times, dare I say more than a little Wilbury like. Love Is Here closes the album and it is another "Altogether Now" affair with a wonderful twang leading to a great closing riff out.

Anyway Gang have offered up a splendid sing along album. Far more than the sum of its parts, there is a real feel good bond in the group that just shows what can be achieved when you want a recording to be fun with no strings attached. It is wonderful. Highly Recommended!

Posted by Anything Should Happen at 15:52