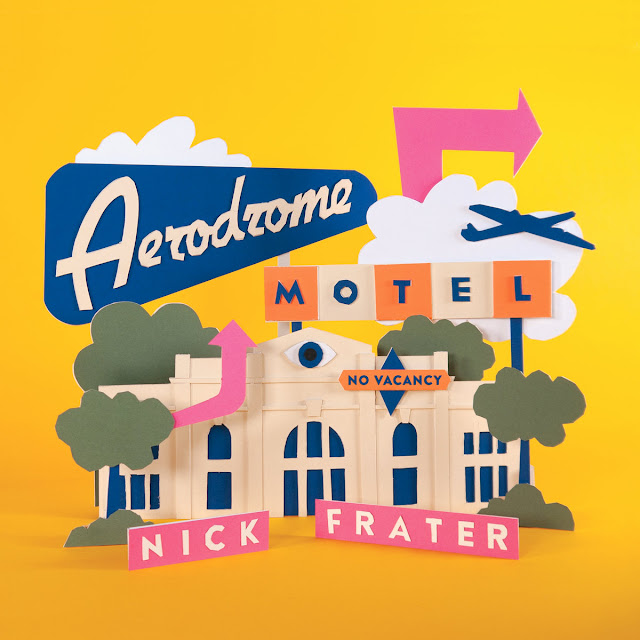 Nick Frater is prolific. An album a year is something that rarely happens these days unless you are Guided By Voices when they appear almost monthly. There is also much being recorded in between the releases, the man never stops.

There can be a danger with this. Frater's sugar sweet vocals across the ten year period risk becoming too much of a good thing with the sheer volume of music. Thankfully, he has avoided this by evolving album to album, not majorly, bit by bit and this has been both admirable and effective.

People may expect that Frater wants to be Paul McCartney or Andy Sturmer when I sense it is really Todd Rundgren that is the target, Aerodrome Motel sounds very and deliberately 70s as well as being the nearest thing to a group album. The vocals are certainly varied and fir the songs wonderfully.

This group sound is aided by the collaborators that include Dana Countryman, The Vapour Trails, Nick Bertling, Whelligan, Joe Kane and Luke Smith. I'm particularly delighted about Smith as I burst into tears constantly about the loss of Ulysses.

That 70s feeling covers the decade. Rough & Tumble adds a Thunderthighs like Sax and an hypnotic The Equalizer type background synth. Frater's vocal takes on a more earthy tone and the song moves at a rapid pace underlining the man's gift with a chorus.

Dancing With A Gertrude is very different, a big studio ballad, the type you used to hear on those classic 70s Pop Rock albums from the likes of Jigsaw when the singles in no way revealed the delights on the album. No Hard Feelings aches with a weeping twang.

The stand out song though is the splendid Love Heist, a potential pop single of the highest order. It is the type of song that you hear less and less these days with the singles chart being so irrelevant. Iain Hornal gets there at times, but nothing matches this. The chorus will stay with you forever.

Aerodrome is a wonderful album. I'm not gonna go on about it being Frater's best ever because every album he offers up is great, always a little different. It is like having a Brill Building in Croydon and oh those choruses!!!! Highly Recommended!

You can listen to and buy the album here, here and here and everywhere.

Posted by Anything Should Happen at 18:54