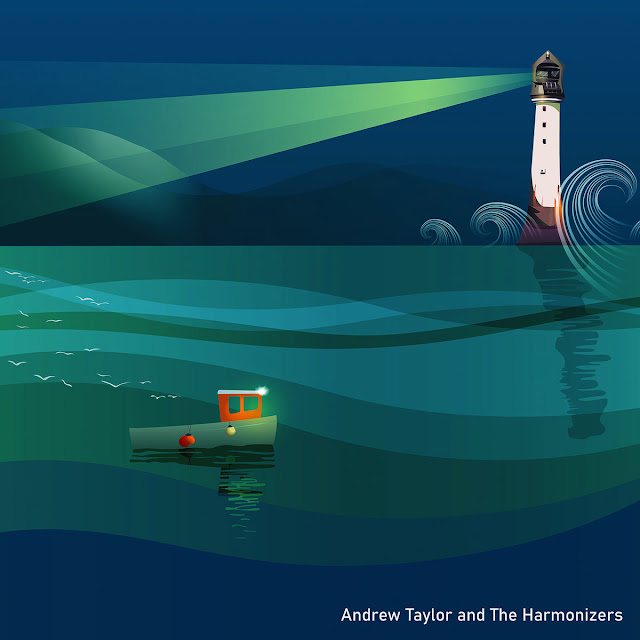 Three or four of us writers joke about how there are periods when every band are compared to another so much that it becomes cliched and ends up with completely inappropriate comparisons. We've seen it with XTC, Jellyfish, Nada Surf and currently, Guided By Voices.

But none of these compare to the number that used to get compared to Teenage Fanclub. Now that that has died down, it seems ok to mention TFC again and the band that has always been closest (and maybe have even surpassed them) are Dropkick.

I've mentioned before how consistently great the band are, but I'm also in admiration of Andrew Taylor's adventures away from the band. His soothing gentle vocal lights up all of his projects and this is no exception.

I've spent 2021 praising artists who avoided the lockdown offering up something lo fi that suitably tells you how sad the year has made them. The Harmonizers have done just that and the trio of fellow Dropkick mate, Ian Grier, Iain Sloan and brother Alastair Taylor should be applauded for this.

The sound is exemplary and in many parts, the album sounds like a Dropkick album. But there is a difference and that is Sloan's wonderful Pedal Steel. This emphasises the difference and the variation. It marks out the Country Rock and Americana. It even makes some of the Guitar Pop in to something different.

The simplistic way to describe the album in general terms is it being like a cross between early Eagles and latter day TFC. The best example of the Country Guitar Pop that I mentioned is the magnificent, Life Is Good. Many of the songs are equal to it, but none would make a better opener.

I could make the case for any song, but for the reason of brevity only, I'll pick out the deviations from the norm. I'll Never Win is all Gerry Rafferty. Everything's Really The Same follows that trend with its melancholic Stealers Wheel feel. The vocal is even a ringer for the Egan - Rafferty Voice blend.

Roundabout is very Doolin' Dalton in style, It's About Time is a stripped down joy and For This To Pass is an absolute Tour de Force, a perfect example of how Pop can be more complicated than it appears and yet still be incredibly melodic.

For all of this variety, it is strangely the two most Dropkick like songs that appeal most. When I Don't Understand and Older are those and the latter mixes Jangle Pop with Pedal Steel. The vocal harmonies should also get a mention. The whole album is welcoming top notch fayre.

You can listen to and pre-order the album here.

Posted by Anything Should Happen at 21:20