Vegetarians & Carnivores - A Day Of Rainbows 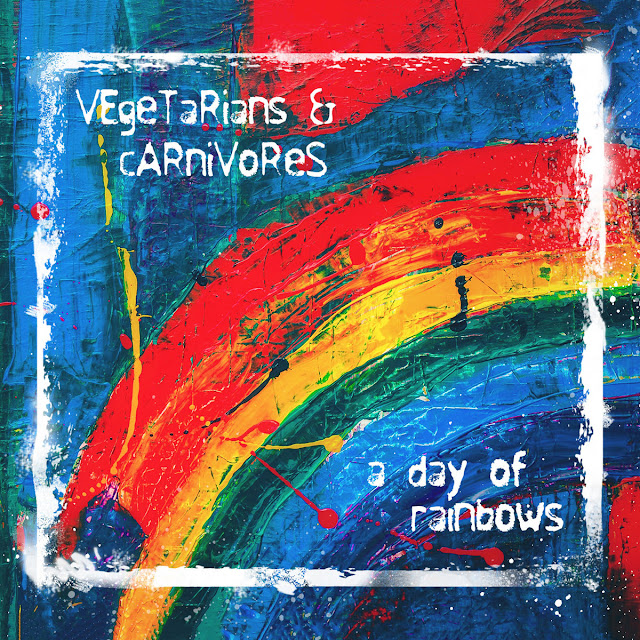 Simon Carbery is the Vocalist, Guitarist and Songwriter for the excellent The Wood Demons, a band that doesn't get the credit it deserves. They tread the middle ground between Prog and Psych, but there is very much a Folk slant in what they do.

Vegetarians & Carnivores is Carbery's solo project and whether alone or collaborating, the sound isn't quite as expansive, but takes as many, if not more chances adding even greater variety. This doesn't sound like a debut album, probably helped by the skills honed in The Wood Demons.

Where Do Friends Go is a great piano led affair, fine Pop Rock in the mould of John Howard and even warrants an even more stripped down closing reprise. The song is charm personified, but you shouldn't be lulled into your armchair as the album takes on many directions.

Crippled Dreams is as fine a slice of Toytown you could wish to hear, wonderfully wacky, yet Option C is an opener that is very Modern Prog. Dubrovnik Rooftiles is cinematic Space Rock and Nation Of Us is like a World Vocal that is similar to Russell Mael's spoken verses.

Well.... is one of two epics, a song that just builds and builds and ends somewhere near Jazz Rock. Beautiful Tuesday is an absolute Psych masterpiece, but also contains parts that edge towards Pop Rock. It shows that Psych doesn't have to be brutal.

I thought The Wood Demons offered great variety, well there is even more here and the inventiveness shines through. A Day Of Rainbows isn't an album that will suit everyone, but if you want to expand your horizons and taste, you will find it surprisingly soothing and fulfilling.

It is also worth the admission alone for Crippled Dreams.

Posted by Anything Should Happen at 15:44