The John Sally Ride - Now Is Not A Great Time 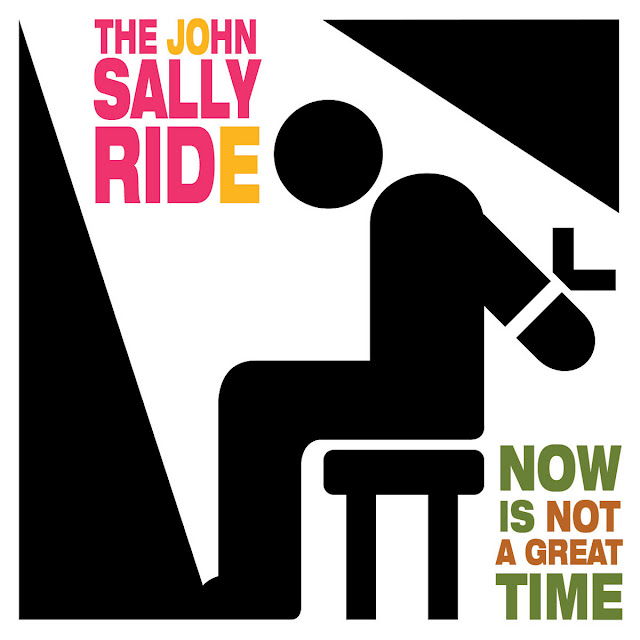 I've been a friend of Drummer, Sal Nunziato for quite a time. We share the same sense of humour, a mixture of the hilarious and the cynic. I also chat with John Dunbar regularly, mainly about music, we share similar tastes. Sal Maida is someone I admire as a fantastic Bass Player and strangely for someone so melody led, I am always driven to the Bass. His adventures are legendary and he was in Sparks for gods sake.

So you'd be forgiven for thinking that I'd review and write great things about them. Their second album, Nothing Doing, was in the Top 10 IDHAS albums of 2018, deservedly so and now the third is upon us, inevitably delayed by the obvious.

Dunbar is a fine songwriter with a voice the right side of Power Pop, I've established Maida's credentials and Nunziato is a splendid drummer. There is more though, because there is a fourth member, Joe Pampel, who takes on Lead Guitar duties and this has added a whole new dimension to the sound.

It has brought out the best in both Sal's, inventive bass lines and some great rock drumming. The sound is bigger, wider and the Pop Rock now leans far more towards Rock. That's not saying the Pop isn't still present. The 60's Beat of She Doesn't Do Nostalgia is somewhere between the Small Faces and The Kinks with a solo that is Psych Pop with a slight jangle and some great vocal harmonies.

That Pop is also present on what was the second single, Putting It Off. which is so so jaunty. You Let Her Break Your Heart Again is a Ballad that musically wants to be Toytown. Is It Over Already cleverly mixes a shuffle with a twang and a Bluesy riff and what about that Bass run?

It is the Rock that grabs you most though. He Doesn't Know That He Snores has Pampel throwing Townshend shapes and I Never Understood (Where I Stood With You) is classic mid 70's Guitar Rock territory on which Pampel excels.

However my favourite is that first single, Far From Eaten Out, it has been an earworm for nigh on two years and is still a fantastic song. So the Power Trio have become an even more powerful Quartet, brilliantly so. Another point to make is Dunbar's lyrical strength matched up with some unusual song titles. This album transcends the Pop Rock label that the band have. I think "Top Notch" is the phrase that you are looking for.

Posted by Anything Should Happen at 17:30

Email ThisBlogThis!Share to TwitterShare to FacebookShare to Pinterest
Labels: The John Sally Ride