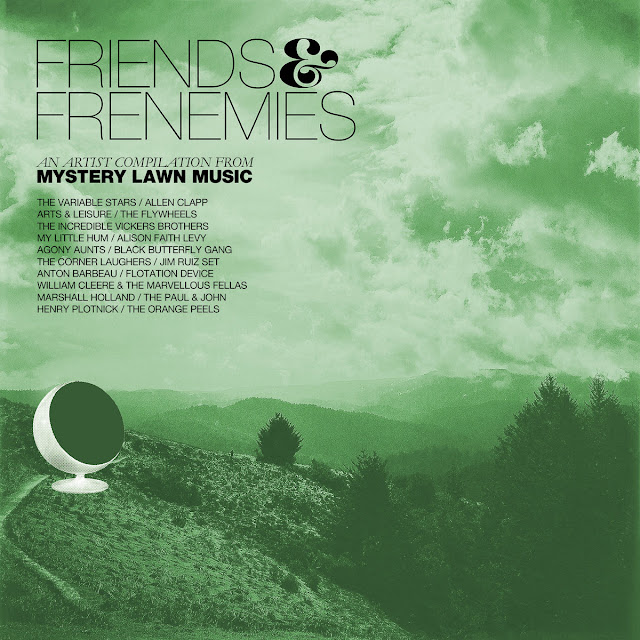 Allen Clapp is largely known for the Magnificent Orange Peels. although his solo work matches anything from the band's great back catalogue.

Mystery Lawn Music was founded by Clapp in 2009 as a way of releasing The Orange Peels' crowd funded album 2020. After the album was released, other artists approached him to see if they could appear on the label.

At first it was mainly North Californian bands that were produced at Mystery Lawn Studios. Clapp realised that most bands could get their music ready for the world, but didn't know how to release it for general consumption.

Mystery Lawn Music has grown and grown and the initial half a dozen artists are now approaching 20. It has developed into a community of like minded musicians, far beyond that North Carolina base. The artists often play together, swap band members and ask each other for advice.

The 18 songs on offer are from a varied selection of artists. Some are well known to Power Pop fans, such as The Orange Peels, The Corner Laughers, Anton Barbeau, The Flywheels, Agony Aunts, Jim Ruiz and William Cleere. Others are less well known, but every bit as good.

11 of the 18 songs present are exclusive to the compilation, for many this is the premier. Of those 11 songs, Allen Clapp himself has included Friend Collector.


Mystery Lawn Music offers up a vast array of talent that enhances all's music collection and sphere of musical knowledge. It is available for the bargain price of 5 dollars here. It's also available from the likes of Amazon, iTunes and Spotify.


Posted by Anything Should Happen at 10:49