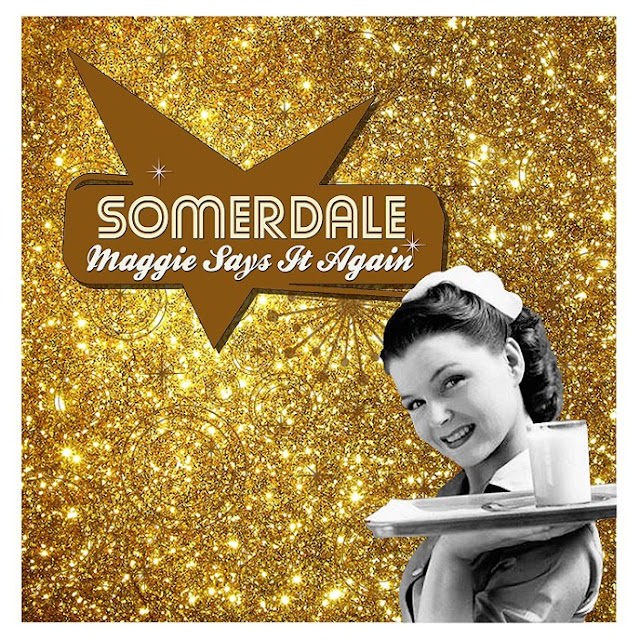 I've never done lists, I've never seen the point. My favourites change weekly and a lot of the time, you are comparing Apples with Oranges. I have always picked an album of the year and for I Don't Hear A Single's first year and for the first time ever, I named two albums as my joint albums of the year.

Nick Piunti's Trust Your Instincts album is his best yet and that shared the spotlight with Somerdale's third album, Shake It Maggie. Nick Piunti is on Marty Scott's revived Jem Recordings Label and the fantastic news is that Somerdale are now signed to Jem. Having the weight of Jem behind them, a label that includes The Anderson Council, Nick Piunti and The Bayonets on it can only help give Somerdale the success they clearly deserve. I really do rate them that highly.

The album really is so good that it deserves wider attention, so the band returned to the studio to add four new songs to the original masterpiece. All four are great additions and you've probably heard them on the radio. I know my colleagues at KOR Radio are well into them.

I've incorporated my original review below. You can buy the album for download or as it should be heard, CD, at Amazon US and Amazon UK.


Now this is the territory that I always feel at home in. New Jersey's Somerdale are a three piece power pop group that would easily be at home in 1975 UK fighting it out for a Top 5 spot with some Chinn and Chapman prodigy.

The album really is high class Pop Rock. In ASH's nine years, this is the sort of thing we usually celebrate. However, it's normally some lost album that we fawn about, Jigsaw, Pilot, Ace, you name 'em. We've often mused about why there are no new bands doing this now. Well now we have Somerdale.

This sort of 70's Medium Wave Territory is something I spend a lot of time listening to and trust me, I know my stuff. I also get to listen to a lot more badly done stuff than good. "Shake It Maggie" has been the biggest surprise for me for a long time. It's fantastic.

Don't get the impression that the album is derivative, because it's not any way. It doesn't wear it's influences on it's arm. the songs just gently remind you of that time.

"Take It From The Top" could be Liverpool Express and should probably be the lead single. "Waiting For You" could be Jigsaw. On other songs, you hear 10CC, The Arrows, Andrew Gold, the list goes on.


"Puddles Of Me" could be prime time Badfinger.  "She's Leaving California" hints at a rocking John Miles. The biggest surprise is that Somerdale are American, they sound so English. Finally for the Power Pop Kids, well there's "The Coolest Kid In The Room", pure Fountains Of Wayne.

I remind readers often that this place is not for the gushing, I receive a lot of music and it's always appreciated. However I have a policy of only reviewing things that I like. I've done hatchet jobs on things that I don't in the past, I'd rather not these days, it's unfair and I just choose not to review them.

So when I tell you that this is the best thing I've heard in ages, you can trust that remark. Shake It Maggie is, it's a superb listen and right up my street.


Posted by Anything Should Happen at 12:49

Email ThisBlogThis!Share to TwitterShare to FacebookShare to Pinterest
Labels: Somerdale