Slave To The Algorithm 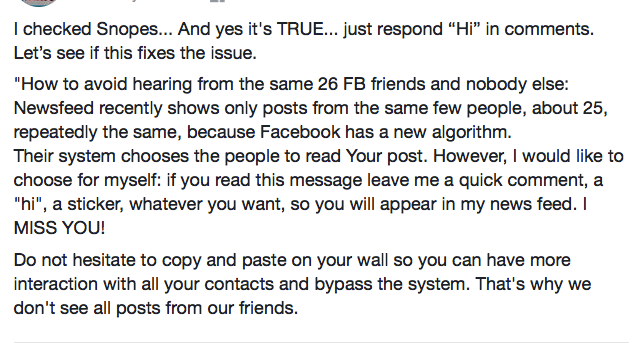 So we've all been inundated with this nonsense over the past few days. If it's so true, then why have I seen it about 500 Times. However, there is something about the new Facebook Feed that is important if you want to support the artists you follow or discover.

I've always been a bit sniffy about Facebook, but it has to be said that I have met people that I would never have come across. The days of searching for a band on Google first are becoming a thing of the past. More and more, people get their information from Social Media.

There's no doubt that when I put an Album Review on Facebook that it drives people to the post and they listen, buy or investigate more. That's what IDHAS is about and long may it continue. I've often been asked why I don't set up a dedicated Facebook page to here. I did test that, but all Facebook wanted was money to promote it, so I felt a group page and my own would be enough.

This is where I get to the point. Facebook's changes that now prioritise individual friends' posts rather than companies may make people think that there timeline will be a much happier place. To some degree it will be, but caught in the middle of this are musicians trying to let you know what they are up to and they are caught in the headlights.

Facebook will prioritise individual account names. If you are a company or more importantly, a musician operating with a Facebook artist page, you will need to pay to promote your posts or people will not see them.

I get most responses from my personal page. It must be a right pain in the arse for people who don't like music seeing the activity. But when I "like" a band on Facebook, I find others do because they get notified that I have. The same happens on Twitter and again it may irritate some, but it is for the general good of music.

I've always been a bit sniffy about Facebook Likes. I saw them as a vanity thing and we know the number of friends does not necessarily equate to the popularity of a person, far from it. It just means you can market yourself.

I also get annoyed by Internet DJs and Bloggers who get cranky about people not following them back. On another point, I get more irritated by supposed tastemakers, a term I hate, who say post links to the songs in the comments. If you knew what you were doing, you'd know, you wouldn't need to be told.

But it has never been more important for you to like a musician's post from your personal account. They know they are reaching people, know they are loved, gives them encouragement in a difficult business and most importantly, others see the post.

As for me, I'm not particularly bothered by likes, it's about the message not the messenger.


Posted by Anything Should Happen at 13:09