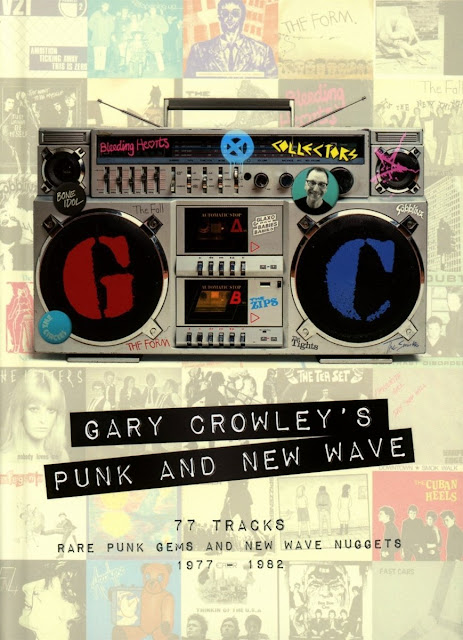 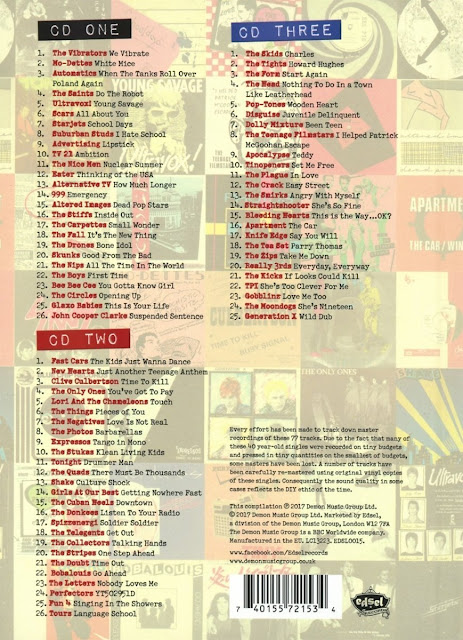 I think you know that I'm not really a compilation listener. Whenever I see anything covering Punk, New Wave or Power Pop, the compilations have a mix of the obvious and the "why the hell is that on there, it's not from that period / genre?"

But this is really great. If IDHAS had been around at the time, it could very well feature the majority of these artists. I've always looked at Gary Crowley as Radio's version of Paul Whitehouse's "Int Milk Brilliant" character, but fair play to him, he's always supported those that have suffered from underwhelming air play and generally seems a likeable guy. The involvement of Jim Lahat would also certainly seem to enhance the choices.

The period is a bit stretched, 77 - 79 or 80 may have been suited as Post Punk wades in, which was a very different scene. The compilation is much more New Wave than Punk, but there's no harm in that and at £20, the bang for bucks is high.

It is lovely to see the likes of TV21, Fast Cars, The Stiffs, Teenage Film Stars and The Boys here. So to the more obvious, such as John Cooper Clarke, The Only Ones, The Skids, The Saints and The Vibrators.

It is fairly obvious that the set was put together with loving care, rather than a dash for cash and it's a fine, if uneven listen. If you were there, you'll love it, if you like the same sort of sounds now, the same. It would be lovely to think that da kids will search it out and listen to what produced the now.

You can buy the compilation at Amazon and everywhere.


Posted by Anything Should Happen at 18:26