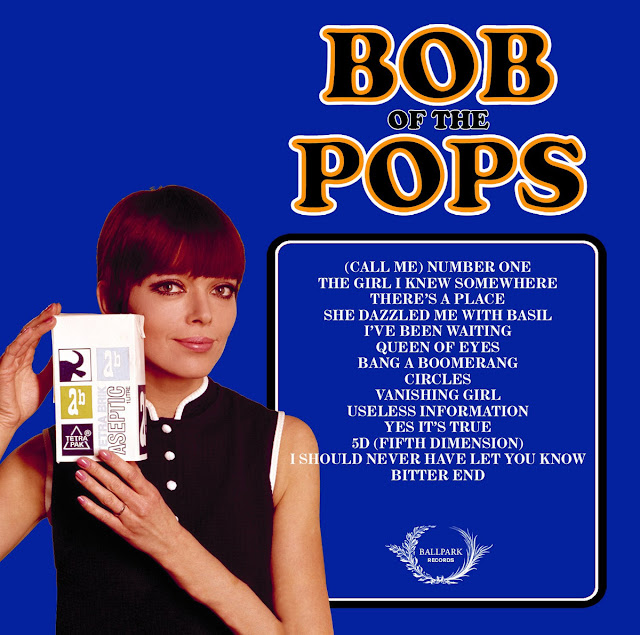 I've always been a fan of The Junipers. I've always thought of them as a more modern day Diesel Park West. Maybe it's the Leicester connection, but more that Robyn Gibson has an almost unique Gentle Vocal, slightly different to John Butler. but just as good. You can read my review of Red Bouquet Fair here.

Gibson had always wanted to record a cover album and so after the weekly Junipers' rehearsals, he recorded the first Bob Of The Pops album over those years and was astonished at the fantastic reaction that the resulting album gathered. You can read my review of the first album here.

The Junipers were now mothballed and so Robyn set about recording the excellent Volume 2 in five months, a tenth of the time of the previous album. Volume 2 is equally excellent and thise Teenage Fanclub comparisons from Volume 1, feel more so on Volume 2.

Then Bob Of The Pops became a band, so this seems the right time for Robyn to tell the story to this point.


"The only purpose of this whole thing is for the sole purpose of fun.  I started recording solo cover versions initially as a teenager, enjoying the chance to make a 'band' sound by playing drums, guitars bass etc. Just to play to mates (for fun.)

Cut to years later and I've managed to get my foot into the door of one of my favourite bands by accidentally becoming their singer (I joined as guitars/harmonies, that was the plan anyway.)  My first band practise with the group, the original singer didn't turn up and in fact, never did again.  Quite lucky aren't I?

The idea for a solo covers album had been a constant 'one day.. I'll try to do this' notion for years, but finally happened when I suddenly had enough fun solo covers (which I'd knock up after band practises or recording sessions with the Junipers, staying behind afterwards to record drums) to actually make up an album's worth.

So this was volume one.  It took about five years to get enough songs recorded.  You know, just for fun..  The idea was always to make it to give away, (Absolutely so, as I couldn't take any credit for all the fantastic songs I was getting to sing. These are written by creative geniuses!)"


"I was so astonished at the positive reactions to Vol.1 and secretly a tad proud to have finally made 'an album' by myself, that I couldn't help but attempt a second volume straight away. Which I managed to get done in about five months, this time...  (Due mainly to the fact that the Junipers had gone into the deep freeze for the time being... What's a feller to do when the weekly band practises are knocked on the head, temporarily?  There's an empty studio, just sitting there... Impossible not to spend a night or two per week doing music, even if it's less sociable on your own..)

Whilst about halfway through recording volume 3, earlier this year, I got my old pal Ben, who'd been missing the Junipers' nights as much as myself, but hadn't had the luxury of still going 'down the room' every week, to come and play drums.

It only takes two mates to change a solo thing to a band, it turned out. We should have done this months ago!  We've been constantly meeting up every week since to record or play together.  We were even offered a gig (Playing support to the unbelievably good El Goodo), so by default, needing a name to put on a poster, 'Bob of the Pops' became the name of the band."

The first gig was done, (for the sheer fun of it), as a drums and guitar 'band', but a bass would have made it even better... So for the IPO, we've enlisted Ash, also a Juniper. (I'm seeing a pattern here)  All of a sudden I've got 'my own band' (for the first time in 30 years of playing in groups...)  Ash and Ben are such a great rhythm section, we've known each other as mates and band mates for many many years. We all have a laugh, almost all the time... I love it.

I am astonished at my luck and fortune to be having seen this grow into what it now is, all by itself, almost by accident. Like I say, quite lucky, aren't I really?"


Posted by Anything Should Happen at 17:32

Email ThisBlogThis!Share to TwitterShare to FacebookShare to Pinterest
Labels: Bob Of The Pops, IPO Liverpool 2018, Robyn Gibson, The Junipers