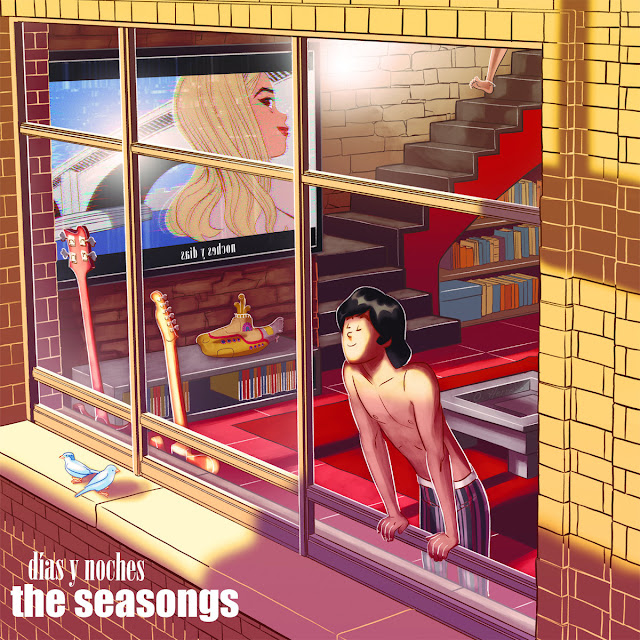 The Seasongs are a bright and breezy Spanish Trio. Spain isn't given the necessary kudos for it's contribution to Power Pop and Pop Rock. There's a burgeoning scene over there, as well as super Record Labels such as You Are The Cosmos.

You may have heard The Seasongs on the IDHAS Radio show. If not, then they are certainly worth investigating further. Here I talk to Carlos from the band.


"Our biggest musical influences come from bands like The Who, The Beatles, The Kinks, The Byrds, Big Star and David Bowie. Mainly classic bands from 60's/70's. We love riffs and vocal harmonies, so naturally we love Power Pop.

Most of our songs are created from a riff, so maybe The Who are our main influence, though we recognise The Beatles as the greatest band ever.  Pete Townsend is a real great influence in many ways.

We have been writing songs in English for a long time but for some time now we are writing in Spanish since this is our native language. But our essence remains the same, we love melody.

"Music is Life and Life is Music. Sometimes happy, sometimes blue, sometimes happy and blue at the same time. There's a connection between ourselves and the Universe through music.. it's something magical.

We feel better when we are playing or writing songs. Music is a need, it's that simple. Our songs are a part of us so we love them."

Tell us a little about the history of the band?

Our latest EP is titled "Días y noches" from last year. It' is released on Vinyl by the Spanish label Clifford Records as is the"Buscando el sol" LP. It's been recorded, mixed and produced by Pepe Bermejo (Bass player in Happy Losers, Mamá and Los Imposibles).

We have performed many gigs over the years, supporting both international and Spanish bands like The Jeremy Band, Stefan Johansson, Ugly Beats, Wiretree, Dropkick, Squire, Cooper, Happy Losers, Bang 74 and the José Estragos Band..

This year we'll be playing at IPO Liverpool for the seventh time. We also played at IPO Stockholm in 2016. Our albums are also available by Jam Recordings (USA), Kool Kat Musik (USA) and This Time Records (Japan).

What are your current and future plans?

"Well, our nearest concerts are at The Cavern Pub on Friday May 18th, 10pm and at The Cavern Club (backstage) on Saturday May 19th, 5:45pm.

Furthermore, we'll be supporting the Australian power-pop band The Stanleys in Madrid at Fotomatón on May 26 and the great Scottish band Dropkick in Madrid at Fun House on July 14.

We're planning to record a new album this Summer. We have enough songs to release a new LP."


What you think of IPO and Liverpool

"IPO is the best pop music festival in the world. We have been playing at IPO from 2010 to date.  We have lived great moments there, playing, listening to bands we look up to and discovering other bands we hadn't heard of before. We are grateful to David Bash for this.

We love The Beatles, so we love Liverpool: a magical city where the Beatles spirit remains on every street."


As previously mentioned, you can see The Seasongs in The Cavern Pub on Friday 18 May and at The Cavern Club on Saturday 19 May. You can listen to and buy the band's latest EP here.  You can also discover The Seasongs' Back Catalogue here.


Posted by Anything Should Happen at 19:25

Email ThisBlogThis!Share to TwitterShare to FacebookShare to Pinterest
Labels: IPO Liverpool 2018, The Seasongs