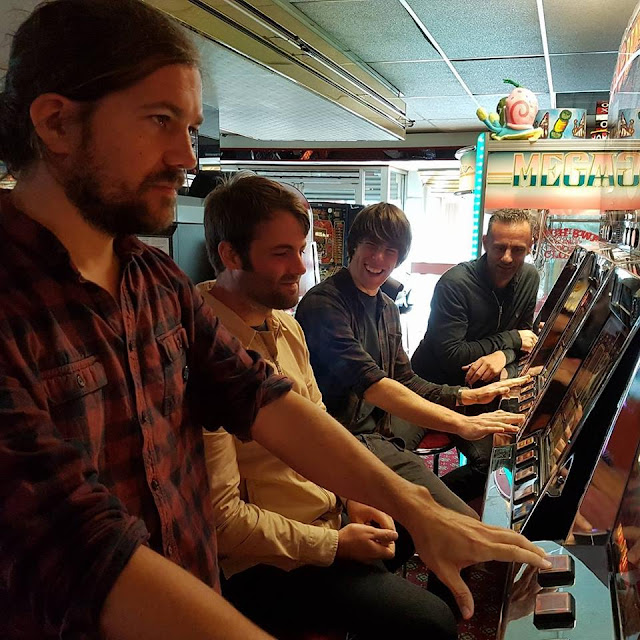 Back onto the IPO Liverpool Previews with the outstanding mylittlebrother. Here I talk to head honcho, Will Harris.


What made you start as a musician/band and who were your influences?


I've been playing music since I was very small, and have been in various bands since my teens. mylittlebrother began whilst I was on a break from touring (playing piano for Aaron Wright  My girlfriend asked me why I hadn't recorded my own stuff and I gave her feeble excuses until she persuaded me to try.

I recorded the first song ,"Nosedive", on my own in my bedroom and a local rehearsal room in Carlisle, and released it with no expectations. It got picked up by Tom Robinson's Fresh On The Net, which led to exposure and airplay on BBC Radio 6 Music and Radio 1. It got some unbelievably good reviews, so that gave me the confidence boost needed to get a band together and start playing live.

My influences are very varied. One of my earliest memories is making a mixtape from my Dad's old vinyl singles (I would have been 4 or 5). I remember particularly loving Telstar (The Tornadoes), Red River Rock (Johnny & The Hurricanes), everything by Simon & Garfunkel (particularly The Sound Of Silence), Good Vibrations. Also Return To Sender by Elvis (because I thought it was about a horse, ("she rode upon it").

Since then my tastes have broadened. I still adore 60s pop, but I also listen to a lot of Midlake, Grandaddy, Flaming Lips, Mercury Rev etc. Simply put, I just love good music and any good music that I hear influences my writing.

What are your thoughts on IPO and Liverpool?


We hadn't actually ever played in Liverpool until we were asked to play IPO 2016. We had a wonderful time playing, watching the other bands and exploring a fantastic city. Playing at the Cavern is obviously a huge honour for any musician.

To play in a venue with that kind of history is a really special opportunity and IPO brings so many like minded people together that it is even more special, so we're over the moon to be coming back.


We've pretty much finished our new single 'Cyanide' which will be out in June. The date hasn't been set yet, as we need to get the Promo ball rolling... This will be the lead single from our new album which will be out later in 2018.

The new material reflects our live sound more than our older stuff, so it's a bit heavier sounding, but still maintaining the melodic, harmony-laden nature of our music.

What appeals to you about Power Pop?

Melodies and harmonies. They are a constant in my favourite songs and I think that Power Pop is a genre that really celebrates and explores them. Also, a bit of crunchy or Jangly Guitar never goes amiss either!


What's the Cumbrian scene like at the moment and how do you and Power Pop fit in?

The Cumbrian scene is booming. There are so many high quality musicians around, from singer songwriters like Melanie Baker and Christian Moss, to Penrith bands Kveis and Beachmaster There are a lot of great melody writers in the area. And of course Kontiki Suite are playing IPO on the same day as us and they are utterly wonderful!


You can listen to and buy the band's back catalogue here. mylittlebrother play The Cavern Club, both Front and Back Stages on Saturday 19 May.


Posted by Anything Should Happen at 12:21