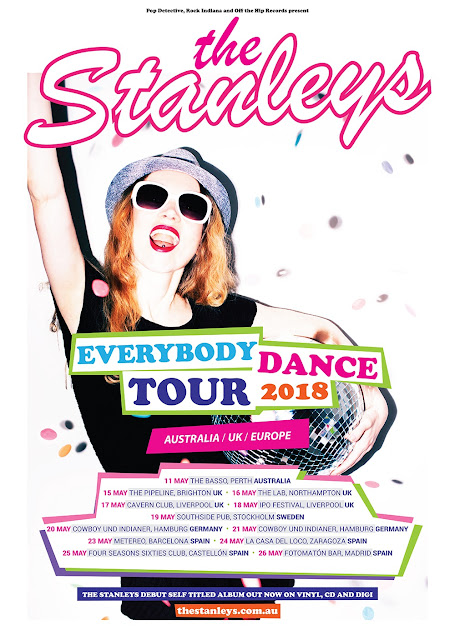 The Stanleys are dear to my heart for a number of reasons. I'd always looked upon the Power Pop strength to be in the US and Australia despite it's roots here in the UK. That strength seemed to have diminished in Oz until The Stanleys reminded us it hadn't gone away. Plus they are honourary members of the Big Stir crowd.

The single, Amy, featured in my Top 10 singles of 2017 as you can see here. The debut album set a IDHAS Radio record. The Stanleys became the only band to have the whole album played on the weekly show. The review of the debut self titled album is here.

So it has been nice to chew the fat with Mark Di Renzo about the band's history, the scene and that extraordinary debut album.

What made you start as a musician / band and who were your influences?


"I guess you could say music was in my blood and I grew up around music so it was unavoidable … but a very good unavoidable!  My grandfather, Giovanni (on my dad’s side), played bugle in the Italian army in the Second World War.

My dad, Charlie, built his first guitar when he was 16 and still plays a little guitar, but more keyboards now. He ran a music business for many years with music studios, his own brand of speaker enclosures (which I use – Di Renzo Custom Sound), road cases etc and at the age of 74 he still is active in some of the aforementioned activities.  My older brother John plays guitar and has been a member of The Stanleys live band since our first ever show.


I started on piano as a kid, but to this day, only really dabble in the playing of black and white keys.  I played and sang in school bands in primary school and graduated to the real stuff in senior school, but only took up bass guitar when I got to university.

Initially my influences were more of the perhaps classic rockier bands, growing up listening to the likes of Led Zeppelin, Deep Purple, The Rolling Stones, Kiss and The Beatles. I probably discovered Power Pop more in my teens with bands like Cheap Trick, Hoodoo Gurus, The Posies, Fountains Of Wayne and Perth’s own DM3.  I still think all that music is great!"

What are your thoughts on IPO and Liverpool?


"IPO has a special place in The Stanleys' hearts since we played our first ever gig at IPO LA back in 2011, before playing anywhere else in the world.  We hadn't even played my home town Perth before.

My previous band Gigantic had spoken to David Bash about playing his International Pop Overthrow Festival, but despite touring the US three times we never quite made it.  David and Rina are wonderful people and the IPO community of bands is one that shows each other much love and support the world over.  We've made so many friends around the world through IPO.

As for Liverpool, ask me again after my first visit there to play IPO.  But all reports from others are good ones and to play a venue that has hosted The Beatles, The Rolling Stones, Queen, The Who, Oasis and so many more is an absolute honour.

I also love traditional UK food – Fish And Chips, Shepherd's Pie, English Breakfast etc, so I want to try Liverpool's Scouse, which I hear can be quite a delicious stew.  I'm very excited for the visit!"


"We've been lucky enough to have had quite an overwhelmingly positive response to our debut album so we're still busy touring it.  We've had a recent visit to the US and Europe and we're back to Europe again for the "Everybody Dance Tour".

This time we're playing the UK, Sweden, Germany and Spain, where our European label is based.  We've even learnt a few songs from Gigantic (most particularly for the Spanish audiences), but I'm sure we'll bust out a couple for the UK and other shows also.

After that we'll take a breather.  Tomas is busy finishing off another Caddy album, which will be one to listen out for later this year and Jamie has had his second child so is taking time out for family commitments.

I've been the only lucky one from the studio band who has gotten to tour the album along with my brother on guitars and some other great musicians from Perth and Italy.  There will be a video coming out for Everybody Dance a little after the tour.

I imagine that I'll be ready for a break from gigging by then.  Amongst other things I'd like to improve my cooking skills.  I make a mean Lobster Pasta, but outside of that my food production repertoire is rather limited!"

What appeals to you about Power Pop?

"I think it is mostly about the melody for me.  Great melodies that you can sing along to, together with some crunchy guitars played with gusto and presto musical magic!  I feel the "Power" part of Power Pop is really important for me. The "Power" is the passionate part and a very essential ingredient."


What's The Oz scene like at present and how do you and Power Pop fit in?


"The Oz scene, like most scenes around the world, is pretty healthy as far as talent goes across many genres.  We have the same problem shared by other countries in that there are way more bands than venues and opportunities for exposure for those bands.

As far as Power Pop goes, it's been a dirty word down under for quite a few years now.  There are actually very few bands playing Power Pop down here.  That said I feel Aussie Power Pop had a great 2017 with fantastic albums from the likes of Wesley Fuller, The Naturals, The Wellingtons and The On And Ons. It's just a matter of time until Power Pop is cool again.

Our fan base is certainly bigger Overseas than it is in Australia. We've played way less shows here than we have in the US and Europe  That said, since we released our album, we've been asked to play more shows in Australia in the last few months than we have in our entire 7 or so years of existence and the gigs have been really fun.

We're kicking off the Everybody Dance Tour with two shows in our home town with a great Sydney based rock band called Front End Loader.  I'm sure it's going to be good times, followed by even more good times making new friends across Europe and catching up with some old ones too.  See you soon!"

You can listen to and buy the band's album here. The Stanleys play The Cavern Pub on Thursday 17 May and The Cavern Club on Friday 18 May.


Posted by Anything Should Happen at 22:51

Email ThisBlogThis!Share to TwitterShare to FacebookShare to Pinterest
Labels: IPO Liverpool 2018, The Stanleys