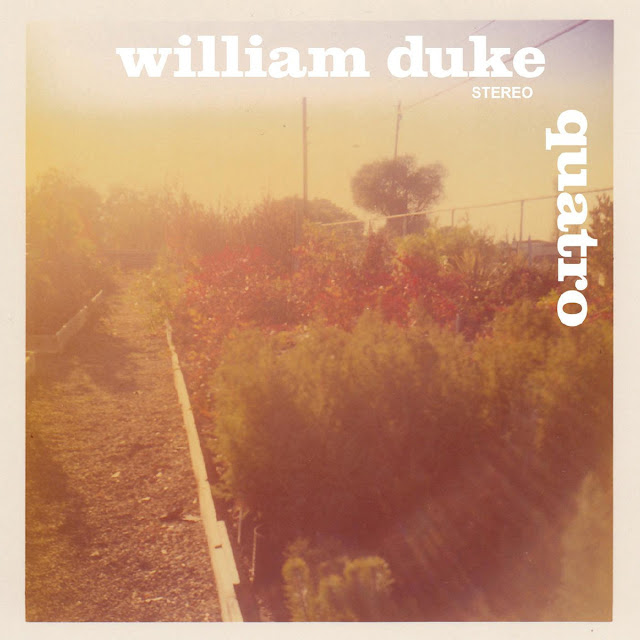 San Francisco's William Duke reaches his fourth album and has fashioned up Sunshine Pop of the highest order. Whilst you can still hear the Acoustic Americana influences of his previous solo outings, Quatro heads nearer and nearer to his Power Pop Bye Bye Blackbirds earlier days.

There's a melodic joy, a real Beach Boys nod at times that emphasises how great the harmonies. As a Brit, I think of McGuinness Flint and Gallagher And Lyle at times, even a fleshed out, bigger sounding Stealers Wheel.

This Brit Folk Pop / Pop Rock influence is most notable on Junk #2, but the variety of material is what impresses most. Hotels And Meetings is Pure Pop Rock, think of Steve Winwood, particularly with the added Organ.

Hotels End is all synth led in Alan Parsons Project world. The countrified shuffle of Cue Up The Memories mixes beautifully with Cal Pop harmonies. Complications #1 is on more familiar Jayhawks Territory.

Thank You is slowed Tom Petty, but the stand out is the opener, Caroline And The Silver Screen. It's a meandering, jangling tempo changing wonder of a song that closes into Psych Pop. One of the best songs that I've heard this year.

So take notes now on how you can buy this cracker of an album. Quatro is available at Name Your Price on Bandcamp, but there is a better way to buy it. It's available on CD for a bargain price as a Deluxe Edition that includes the previous album, The Dark Beautiful Sun.


The version of Dark Beautiful Sun on the 2 Disc Set contains 9 Bonus Tracks. So you get both CDs and a load of extra tracks 10 dollars. You can listen to the album and buy the album here. You can also buy the Double CD Deluxe Edition from Ray at Kool Kat, a great supporter of the music that we love.


Posted by Anything Should Happen at 19:17