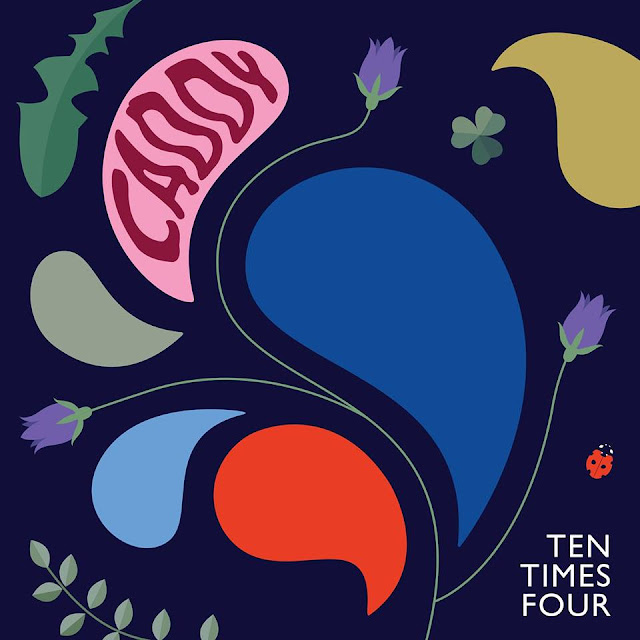 I've been waiting impatiently for the new Caddy album all year and today is the day that it's Poptopia is unleashed on the world. It's been too long since The Better End. You can read the review of that album here.

Since then, Tom Dahl became a Stanley and the band's debut album was lauded as one of the best Power Pop albums of last year, rightly so. You can read my review of that album here. Ten Times Four lands somewhere in the middle of those two albums, gloriously so.

The Better End is beautifully arranged, but the songwriting is reflective, a little melancholic, when it breaks out, it does it gently. In The Basement here mines similar territory. The Stanleys album is more heads down, have a good time, Power Pop and that influence is also revealed here.

At times, these songs are built on meandering memorable riffs, never more so than on Not The One and Somewhere Beautiful, a song that wouldn't be out of place on The Stanleys album. The moody Roadblocks is built around a slow sinister riff, far different to the rest of the upbeat songs.


Reverie is a Jangle Fest, all Teenage Fanclub, a wonderfully melodic strum along building to an Everything Flows bridge. The closer, The Good Ones is a splendid anthem, a real sing your heart out building to a Thin Lizzy Twin Guitar crescendo.

If Miracle Turn is the ideal opener with it's glorious chorus, then The Good Ones ends the album in similar feel good mode. Special mention has to go to Safe Travels, a Glam Rock masterpiece with some fine Beach Boys harmonies. There's so much packed in to it's four minutes.

I've followed Tom Dahl's career since The Yums Yums and I can honestly say this is his best album yet. It's magnificently feel good, epic in it's Pop Scope. It's so easy to forget that Caddy is a One Man Band.

This year thus far has been a fine year for Pop Rock. Ten Times Four is another contender for album of the year. As soon as the album finishes, you want to play it again. Forget about what's happening in the world, this will make you feel that everything is A OK.

Ten Times Four can be bought as a download from the likes of Amazon here. It is available on CD from Ray at Kook Kat from 31 August, you can pre-order here. Ace news for you Vinyl freaks, Markus will be releasing it on Sugarbush later in the year.


Posted by Anything Should Happen at 21:17

Email ThisBlogThis!Share to TwitterShare to FacebookShare to Pinterest
Labels: Caddy