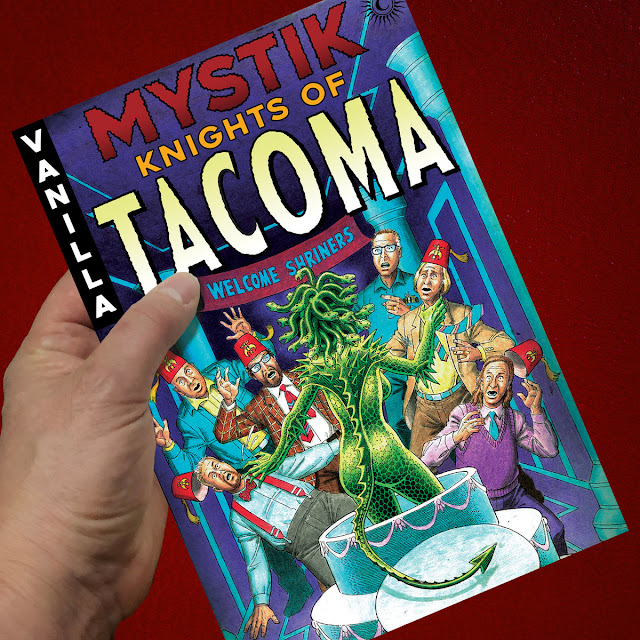 The return of Liar's Club in 2013 was one of the welcome surprises of that year and that album, Come And Go remains heavily played here. It is one of the most underrated Pop Rock albums of the past decade. There's been no Liar's Club since, but the band members have not gone away.

Scott McPherson has reappeared in Pop4 and the superb McPherson Grant, whilst Jayson Jarmon, Sean Gaffney and Dana Simms are part of Vanilla. That trio plus Gavin Guss and Mark Simmons offer up the band's third album aided by a who's who of Tacoma musicians. McPherson guests too.


Mystik Knights Of Tacoma is as excellent and varied as you'd expect from those involved. Great pop is bathed in a mixture of styles from Vaudeville to Pop Metal and all in between. Be Not Coy is the Everly Brothers, Bankside is a spooky Simon and Garfunkel, Monkey Punch could be The Tubes. You catch my drift about the variation?

Man Of The Moment is Bacharach, female vocal and all, Let's Call It A Day is early 60's Teen idol and March March Of The Mystik Knights is some type of Russian Surf. However it's the poppy psych of Sweetshop that stands out here, a storming 3 minutes of bubblegum joy.


It's hard to pick two songs that give a flavour of the album here, but I've tried. It would be best to go and listen to the whole album here and then buy it.

Posted by Anything Should Happen at 16:01

Email ThisBlogThis!Share to TwitterShare to FacebookShare to Pinterest
Labels: Vanilla