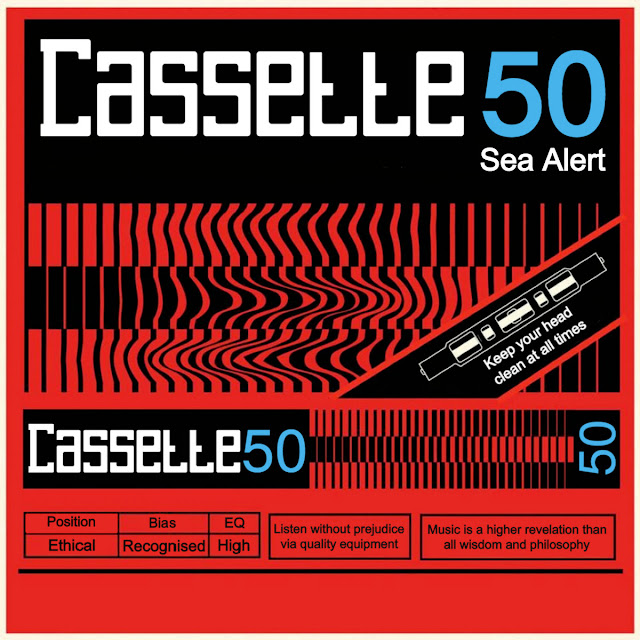 Nick Worrall has been involved in various projects for over two decades. I suspect most will not have heard of any, but you can learn about them all on his website here. The most recently released feature the quartet, Cassette 50.

Worrall is Songwriter, Vocalist and Rhythm Guitarist in Cassette 50 and Sea Alert is deliciously lo-fi, This is New Wave DIY Pop circa 77 - 79 in feel. Nick's vocal is very Ian Broudie and without all of The Lightning Seeds studio backup, the sound can seem a little basic.

However, there are real hooks here and a real lyrical adeptness. You sense with an increased budget, Cassette 50 could fashion up a monster Power Pop album. The 15 songs here are little gems played with a dedication and passion by the four.

Off The Grid is very mid 80's jaunty pop and I Want Out has a Merseybeat jollity, but lyrically is more UK Beat a further years on. Leaving Today is great Scouse Scally Pop and Life Is A Drug has a sound akin to The Zutons.

At times there's a slight reggae feel, particularly in some of the riffs. Too Far Gone is almost Toytown and Let Me Tell You How It Hurts is classic New Wave Guitar Pop and a fine closer. But elsewhere, there are hints of Psych Pop and Glasgow Twee.

Coming in at just under 28 minutes, this mixture of songs about love and the banal everyday is a cracking listen. I've been critical of some lockdown lo-fi, Cassette 50 sound more like their equipment makes it that way and yet they come up with something endearing, charming and joyful.

You can listen to and buy the album on Bandcamp here. The Cassette 50 output is all at Name Your Price. You can also listen to the album following the links contained here.

Posted by Anything Should Happen at 18:41

Email ThisBlogThis!Share to TwitterShare to FacebookShare to Pinterest
Labels: Cassette 50